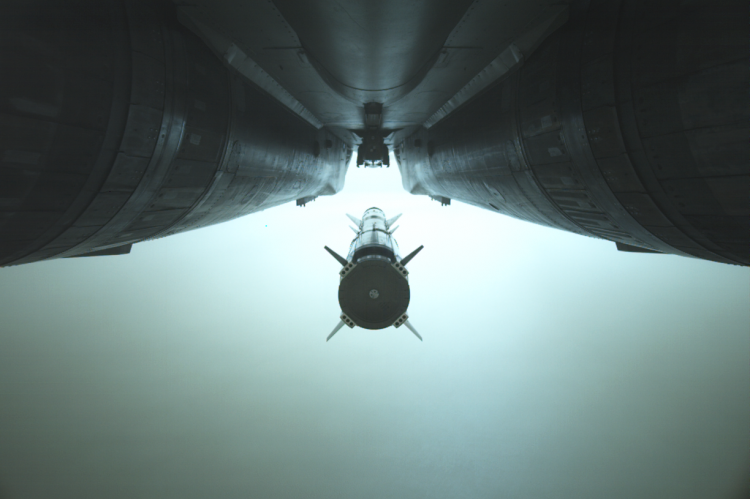 Today, IAF successfully fired the BrahMos air version missile from its frontline Su-30 MKI fighter aircraft.  The launch from the aircraft was smooth and the missile followed the desired trajectory before directly hitting the land target.

The air launched BrahMos missile is a 2.5 ton supersonic air to surface cruise missile with ranges of close to 300 km, designed and developed by BAPL. The IAF became the first Air Force in the world to have successfully fired an air launched 2.8 Mach surface attack missile of this category on a sea target on 22 Nov 17.

The dedicated and synergetic efforts of the IAF, DRDO, BAPL and HAL have proven the capability of the nation to undertake such complex integrations.

The missile, after being gravity dropped from the fighter’s fuselage, flew for its full range towards the designated land target set at the Car Nicobar Island and hit it with “bull’s eye precision,” top level officials who witnessed today’s launch confirmed.

Dr Sudhir Mishra, DS & DG BrahMos DRDO, congratulated the team and said that this Joint effort of BrahMos, DRDO , NPOM & Indian Air force has validated once again its devastating capabilities with Precision and has given a boost to the long strike capability of Indian Air force capable of sending shivers down the spines of the adversaries

BrahMos Aerospace had conducted maiden successful test firing of BRAHMOS ALCM against a ship target in November 2017 in the Bay of Bengal off India’s eastern coast.

The firing could be successfully undertaken with dedicated support from Indian Navy by way of ensuring availability of a large number of monitoring ships to ensure range safety clearance.

The BrahMos missile provides Indian Air Force a much desired capability to strike from large stand-off ranges on any target at sea or on land with pinpoint accuracy by day or night and in all weather conditions. The capability of the missile coupled with the superlative performance of the Su-30MKI aircraft gives the IAF the desired strategic reach.

The historic mission made India the first and only country in the world to complete a supersonic cruise missile triad.