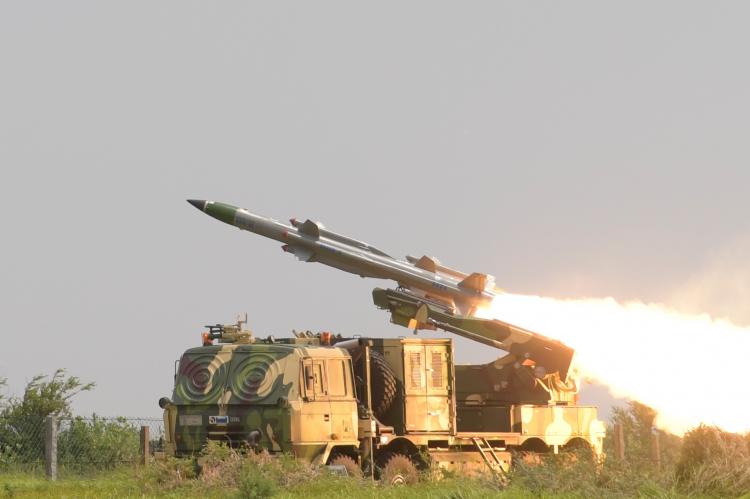 Opposite India, PLA (People’s Liberation Army) has deployed two mobile infantry divisions, one airborne brigade and two more infantry brigades, which comes to roughly a force of about three divisions. Each division has an assortment of anti-aircraft guns (PGZ-07 35 mm guns mounted on self-propelled tracked vehicles; short range SAMs (HQ-17 with a maximum range of 15 km); and infrared homing shoulder fired SAMs (FN-6). In addition to these, the PLA has deployed HQ-9 and HQ-16 area defence SAMs.

The Hong-Qi 9 (‘red flag’/‘red banner’ in Chinese) is a long range SAM with ground and ship based versions. It has a solid propellant and can be deployed as a theatre surface to air missile system. The missile has a maximum range of 200 km. HQ-9 is claimed to be capable of tracking and destroying aircraft, cruise missiles, air-to-surface missiles, and tactical ballistic missiles. It has taken advantage of technological features from the Russian S-300P (NATO: SA-10 Grumble), the U.S. Patriot missile, and existing Chinese systems.

The HQ-16 is a Chinese medium range surface to air missile which most sources say has been jointly developed by Russia and China. The missile is said to be a variant of the Russian Buk-M1 (NATO code nameSA-11 ‘Gadfly’) and Ural/Buk-2M (NATO code name SA-17 ‘Grizzly’) and has a maximum range of 40 km.

Most of the Chinese weapons are copies of Russian origin systems. Consequently, the Chinese have been following Russian operational concepts. The Russian concept of air defence relies heavily on high rate of fire anti-aircraft guns and SAMs in the theatre battle field area (TBA). The Chinese have also been following similar concepts for air defence operations. Therefore, it can be expected that PLA will deploy a dense multi-layered umbrella of SAMs and anti aircraft guns to provide air defence cover to the heavily deployed PLA army in Eastern Ladakh.

In this way, PLA Air Force (PLAAF) will aim to achieve air domination by relying on ground based air defence weapons. But, this sort of model has been tried earlier, with disastrous results, by the Egyptians, in the 1973 Yom Kippur war against Israel. In this war, the Egyptians had deployed a dense overlapping layer of lethal Soviet SAMs and anti-aircraft artillery (AAA). The Egyptian offensive caught the Israelis by surprise as they did not expect an Egyptian attack during the Yom Kippur holidays. While the Israelis were aware of Soviet SAM-2 and SAM-3 systems and had developed counter measures for them, the Egyptian deployment of Soviet SAM SA-6 and ZSU23-4 high rate of fire self propelled anti-aircraft guns completely surprised them. After suffering initial losses, the Israeli AF retaliated with an intense SEAD (suppression of enemy air defences) and DEAD (destruction of enemy air defences) campaign and destroyed the Egyptian air defence weapons.

The important lesson from the Israeli campaign is that, depending entirely on ground based AD weapons for protection from air attacks may not work against enemy SEAD and DEAD missions.

The HQ-9 area defence SAM will be a prime target for IAF DEAD missions. HQ-9 class of long range SAMs are generally co-located with short range HQ-17 class of SAMs so that terminal point defence is provided against guided weapons aimed at the HQ-9 battery. The IAF will have to employ considerable SEAD and DEAD effort to destroy PLA air defence systems. Attacking aircraft will have to know the precise location of PLA SAM sites to destroy them. This will require real time ISR (Intelligence, surveillance and reconnaissance) capability.

Another problem of dense ground based AD weapons is of air space management in the TBA. In an intense battle there will be a large number of PLAAF fighter aircraft transiting in and out of the battle zone on close air support, interdiction, counter air or other missions. In such a situation the chances of ground based weapons shooting down friendly aircraft will be very high as happened in the 1973 Arab-Israel war. In this war fratricide due to poor air space management led to the Egyptians shooting down 60-90 of their own aircraft.

The terrain in Eastern Ladakh is mountainous with an extension of the Karakoram range embracing parts of Ladakh. The adjacent Aksai Chin area forms the western part of the Tibetan plateau but the region is not totally flat as it has undulations in the terrain. In mountain regions providing air defence cover to vital points is a difficult task due to limitations of line of sight (LOS).

The early warning, from radars, available for ground based air defence weapons like SAMs and anti-aircraft artillery can be severely degraded due to obstruction from high mountains. While HQ-9 may be having a maximum range of 200 km it is unlikely to be able to fire at these ranges due to the mountains in Eastern Ladakh. Another point is that the maximum range of 200 km is against aircraft flying at high level. At low level, the range reduces drastically because the radar detection range reduces. For example, for an aircraft flying at 500m height, the maximum range will be up to 90 km only. China’s AWACS aircraft will also have similar limitations of detecting aircraft over the mountainous terrain. Radars work on the principle of LOS which is at a premium in mountains. Therefore, by proper terrain masking and flying at low level, IAF fighter aircraft can avoid detection by PLAAF radars and missile zones.

On the Indian side the existing troops consist of one mountain division and one armoured brigade. These have been augmented by additional troops to counter the PLA threat. To protect these troops, from PLAAF air threat, the Indian army and IAF have deployed indigenous Akash SAMs and Israeli Spyder LLQRMs (low level quick reaction missiles) plus anti-aircraft guns.

Akash is a mobile medium range SAM with a maximum range of 30 km and is developed by DRDO. The Spyder missiles have a maximum range of 15 km and can engage targets from low level up to a height of 9 km. The mountainous terrain will impose similar restrictions on their capability as is being faced by the Chinese AD systems. The laws of physics are common for both sides.

Gp Capt Ravinder Singh Chhatwal (Retd) was a former Senior Fellow with the Centre for Air Power Sudies, New Delhi. He is the author of a book, “The Chinese Air Threat: Understanding the Reality” (New Delhi: KW Publishers, 2016) and has written extensively on military subjects. At present he is pursuing his doctorate from JNU, New Delhi.