Strategic Warfare in the “Phygital” – is India ready?

China has released its new defence white paper titled, “China’s National Defense in the New Era”. It proclaims that we are now an “information society” in an increasingly multi-polar world with economic globalization and developing cultural diversity. In contrast, the previous white paper released in 2015indicated “rapid emergence of information society”. Chinese goal of“mechanization of the military” will be complete by 2020 coupled with substantial “informationization” of the military. By 2035, that goal will also be achieved paying the way for the transformation of Chinese forces to be “world-class” by 2050. It asserts that “War is evolving in form towards informationized warfare, and intelligent warfare is on the horizon”. The “informationized” to “intelligent warfare” will be driven by “ a new round of technological and industrial revolution” through technologies such as “artificial intelligence (AI), quantum information, big data, cloud computing and the Internet of Things” in the military field.

The unipolar world of the 1990s steam-rolled protected smaller economies into opening-up through economic globalization orchestrated by the USA. New Yorker noticed, “When we persuaded developing countries to open their doors to us, we also opened our doors to them. Now they’re walking through[1]." When doors are opened, traffic is both ways. Economic globalization indeed helped to connect the world through technological advancements. There were backlashes. Amy Chuha in her book “World on Fire”[2]described "globalization has created a volatile concoction of free markets and democracy that has incited economic devastation, ethnic hatred and genocidal violence throughout the developing world." The net result though is the information society of today.

The marketing term for this information society, coined in this decade and it seems trademarked as well is “PhyGital”[3]. This is seamlessly combining the physical with digital. A new substrate, an eclectic mix has emerged to play-in and play-with. The warfare in this mix has a changed character.

The emerging “New Era” need to be contrasted with globalization in “Cold-War-Minus” era (1989-2019). 1991 Gulf-War announced the arrival of a Uni-polar world. A decade later, “have-nots” unleashed 9/11. The US then was engaged in a war-on-terror. In this focus, the US missed the rise of new power – the People’s Republic of China. The US considered China as an extended economic system of the free-world albeit with different characteristics. China was able to hide its long- term designs from the USA, perhaps because of America’s intellectual opaqueness[4]or the fascinating Chinese ingenuity, or both. US could not see the covert Chinese surge to replace the US as a superpower through the hundred-year marathon[5]. China under the new President Xi, has evolved a new initiative of reviving the ancient silk routes termed Belt and Road Initiative (BRI)[6]. If the US exported democracy as the free economic system in the 1990s, China wants to export its infrastructural connectivity with Chinese characteristics of co-development, as they term it. The initiative is a potential strategic geopolitical game-plan for the next 30 years of the marathon. The physical landscape is in for a change, again.

There is a new “geography” that we have created in the “Cold-War-Minus” world– it’s the Digital or Cyberspace. Singer and Friedman in “Cybersecurity and Cyberwar – what everyone needs to know”[7], describe “Cyberspace is the realm of computer networks (and the users behind them) in which information is stored, shared, and communicated online”.Our ability, curiosity and ingenuity in exploring the “physical” has resulted in our ability to create this “digital” substrate.

The physical and digital are separate spheres with interactions controlled and interdependence managed through well-established protocols, so far. These separations are getting nebulous as sensor-embedded and connected devices have started emerging in the Fourth Industrial Revolution (4IR). This emerging substrate brings new complexity and uncertainty of levels that we have not seen before. The phygital[8] has started entering the business and commercial sectors. The phygital will create the sixth wave of innovation which will be based[9] on the law of increasing intelligence of technical systems[10], which in turn will enhance the phygital making it ultra-complex. US Army started using the term “VUCA world” for increasing Volatility, Uncertainty, Complexity and Ambiguity[11]. VUCA level of the phygital is sufficiently higher than our current ability and ways to deal with them.

Evolution of Warfare with Revolutions in Military Affairs

Technological systems and their evolution have a transformative impact on war-making capabilities and is captured in a popular term – Revolution in Military Affairs (RMA). Machine Gun, German Blitzkrieg and the Carrier Battle Group by USA and British were considered theRMA. The current RMA combined advances in C4ISR and long-range precision munitions with new operational concepts of network centricity, information warfare and continuous, rapid, joint and whole-theatre operations. Shortly, actual firing and engaging with the enemy systems will be completely overtaken by automated systems. Humans will retain (remote) control through strategic decisions about where and when to strike for achieving war objectives. The 7thRevolution in Military Affairs[12] – called the Autonomous/Robotic war will become more pronounced. A previous article[13]identified 15 dimensions of warfare including the Cyberspace and Economic Warfare. The world is headed towards a new form of “strategic competition” that differs in the form and shape and unchartered territory of cyberspace and the digital economy. The uncertainty and complexity of warfare increase once we juxtapose warfare in the ultra-complex phygital.

Weapons of the Phygital – The Stuxnet and its life cycle

The new munitions that will conduct the war in the phygital may well be cyberspace weapons – the viruses and worms, that are instructions for disrupting the existing programs of digital space. When they are designed, developed and deployed for the specific purpose of disruption of the physical domain via the cyber-physical interfaces these become the weapons of the phygital.

“Stuxnet” [14]computer virus reportedly disabled centrifuges in an Iranian uranium-enrichment plant around 2005-2007. This was discovered only around the year 2010. Stuxnet and its variants unleashed the cyber flaming of the phygital. The next Osama Bin Laden may not need to hijack aeroplanes. He has to build cyber flame systems - the worm that waits for the right moment to attack its prey. Stuxnet, Duqu and Flame are the new weapons of warfare characterized by low or delayed detectability, extreme levels of deniability and safe and remote levels of destructibility. As recent reports indicate[15]the Stuxnet was in the making since 2002 and there are new evolutionary versions active today again. These weapons conform to the most important aspect of targeting the phygital – the deniability of their usage. Indeed, these weapons are DEADLY[16]. Phygital weapons may well be a set of microdevices (electronic spiders) that roam the battlefield, impregnate the C4ISR systems, drones and precision munitions, so that these are“re-programmed” to just turn against their handlers. A Phygital Frankenstein - maybe!

In an earlier article[17] a three-pronged strategy for India was proposed. One must add new ways to think and design our responses in the phygital. In a repolarizing world reflected in strategic superpower competition between US and China is taking place. This is being played on unfathomable cyberspace and ultra-complex phygital territory. Further, the phygital world itself is transitioning through the sixth wave of innovation. The warfare and wars in the phygital world, contrary to an emerging “less-future-wars” world-view, are already mutating to manifestations that are not only opaque to our existing lenses and capabilities but are more deadly.

As the Chinese white paper claims the mechanization of their forces will be completed by 2020 with substantial “informationization”, India needs to evolve her defence and security for the new information society in the phygital. India needs a new theory of political objectives and comprehensive detailing of national interests to be developed for India for the phygital. A tall order indeed, alas, it is necessary now!

Author is the founder director of CRAFITTI CONSULTING (www.crafitti.com) – anStrategy, Technology, Innovation and Intellectual Property Consulting firm focused on co-crafting solutions for global problems. He is the winner of Indira India Innovation award for Entrepreneurship and Innovation Leadership for 2012. He is the principal author of Strategic Decision Making- Applying the Analytic Hierarchy Process published by Springer-Verlag, UK, as part of the Decision Engineering Series. Navneet Blogs at http://innovationcrafting.blogspot.com.He can be contacted at navneet(dot)bhushan(at) crafitti(dot)com. 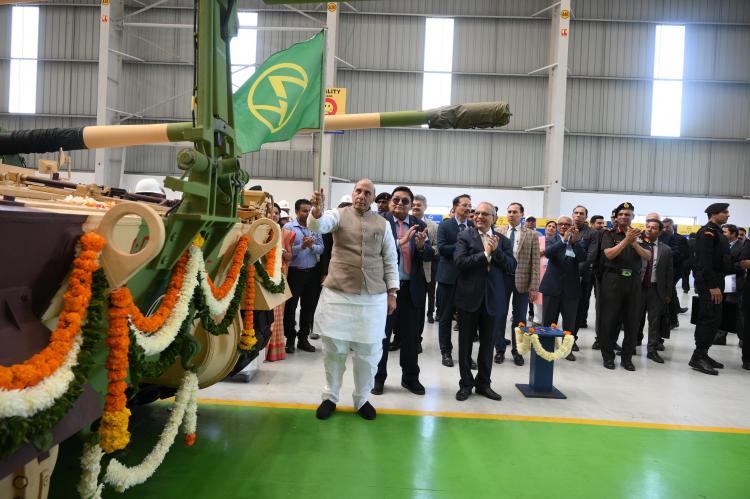