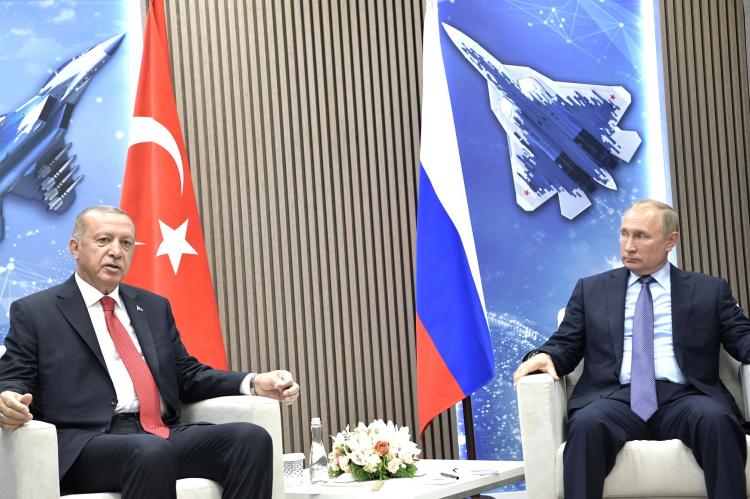 The new-found bonhomie between the Russian President Vladimir Putin and Turkish President Recep Tayyip Erdogan was on full display during the first day of the Russian air show MAKS2019. The shutterbugs did not miss to capture the single moment of the budding friendship and camaraderie between the two leaders.

The Turkish President was seen showing a keen interest in Russia’s Su-57 fifth-generation-fighters. President Erdogan is the Guest of Honour of the Russian President for the show.

The six-day air show was inaugurated by the Russian President is being held at Zhukovsky International Airport, outside Moscow.

While inaugurating the show, President Putin said, “We are interested in MAKS development. For the 14th time already, it gathers people who are not indifferent to aviation and harmoniously combines science and a colourful show.” 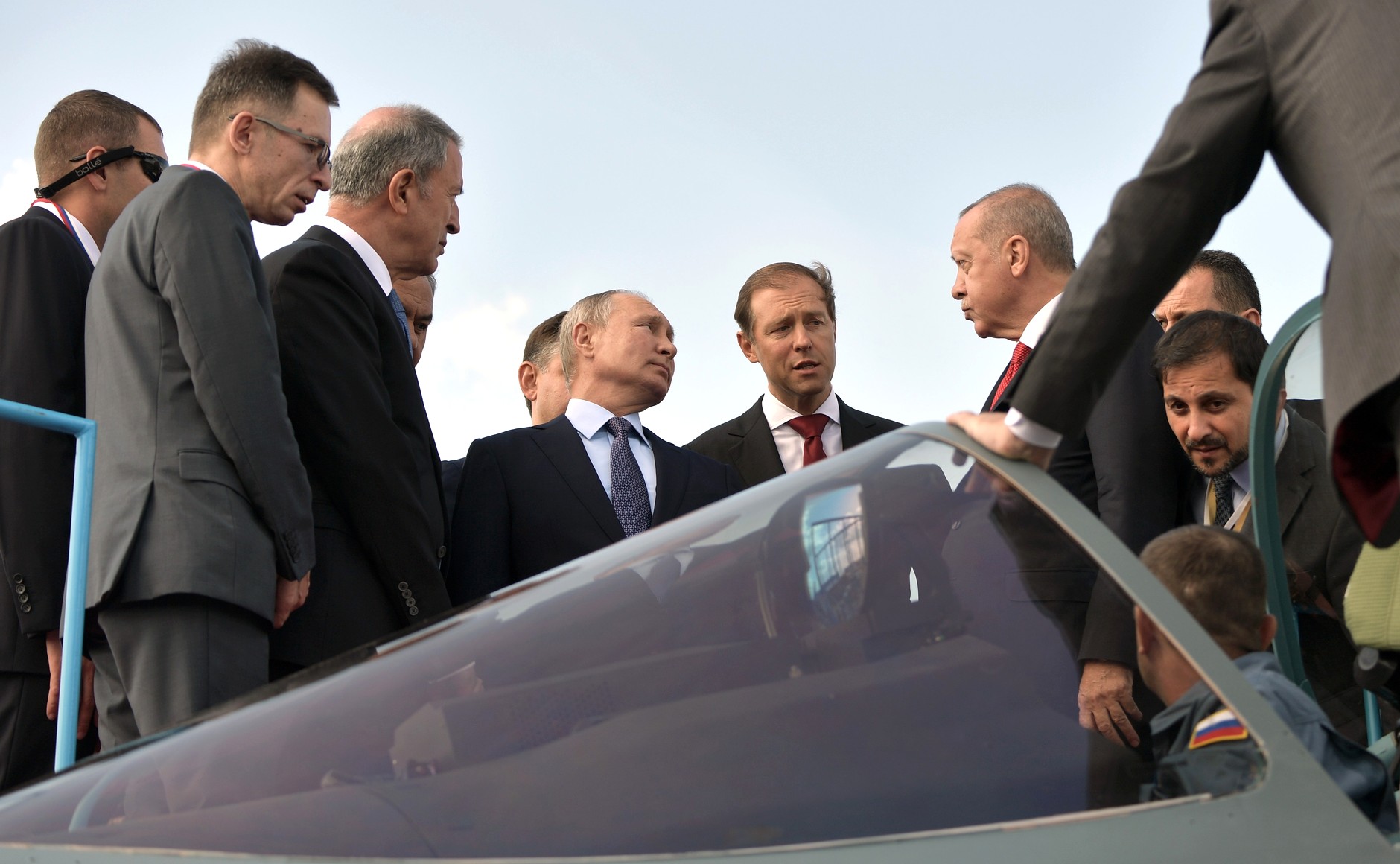 While speaking during the inauguration, A. Levin, CEO of JSC “Aviasalon” said, “MAKS-2019 participants will find bright premiers, a busy business program and numerous negotiations. The exhibition complex is ready to provide comfortable conditions for fruitful work.”

The show is witnessing the participation of 182 companies from 33 countries and over 800 Russian firms. Rostec is displaying around 40 new products including fixed-wing and rotor-wing aircraft.

After the successful purchase of S-400 long-range-anti-air-missile-system, Turkish President Erdogan appears to be considering Su-57 fighter as a replacement for the American F-35 stealth fighters. Erdogan and his Russian counterpart had a close look at the cockpit of the latest bird from Sukhoi Design Bureau.

The two leaders also addressed the press together.

"We talked about cooperation on the Su-35 and even on the possible work on the new Su-57 plane," Putin said responding to a question from Russian agency TASS. 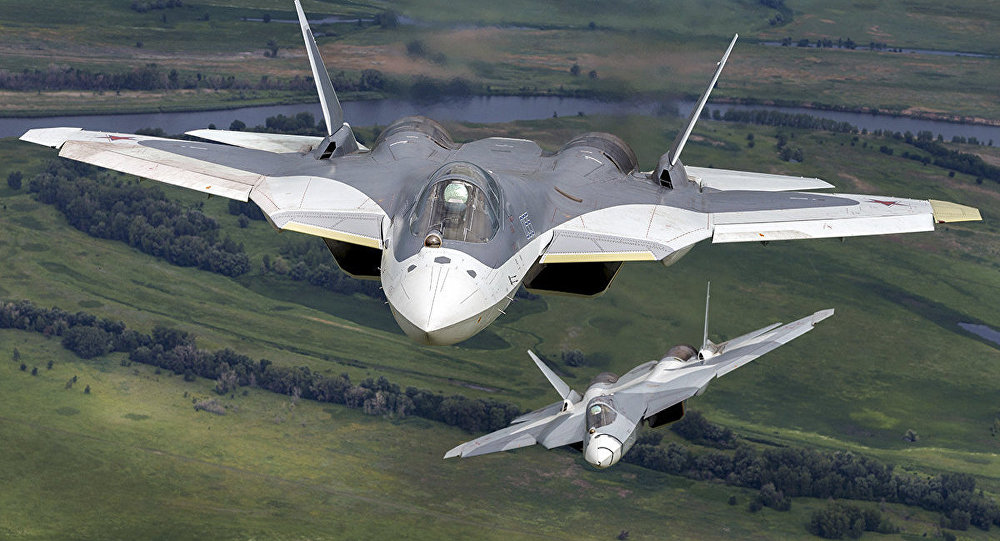 Speaking on Turkey’s interest in co-production of Russian equipment, President Erdogan said, "The joint production [of S-400 air defence systems] is a major step in relations with Russia.”

"We want to spread our solidarity in this area to all the other spheres of the defence industry. This may also apply to military planes," he added.

Simultaneously, Russia has begun delivery of the second battery of the S-400 system to Turkey on Tuesday.

Rosoboronexport JSC (part of the Rostec State Corporation) has invited 120 delegations from 65 countries to the Air Show.

“Today, MAKS has become the main platform for showcasing new Russian military aircraft. Traditionally, the show serves as a starting point for many important negotiations for the supply of aircraft, helicopters and air defence systems, as well as for joint projects in these areas. 2019 will not be an exception. This year, our partners will be able to see demonstration flights of the Su-57 fifth-generation fighter here for the first time, and Rosoboronexport is ready to hold consultations on its export version, including with the involvement of specialists from the aircraft’s developer,” said Rostec CEO Sergey Chemezov.

Rosoboronexport is exhibiting more than 160 pieces of military hardware mainly for the Air Force and Air Defence including the Su-35 and MiG-35 multipurpose fighters, the Il-76MD-90AE military transport aircraft, the Mi-38 utility helicopter, the Orlan-10E UAV and the Viking SAM system. 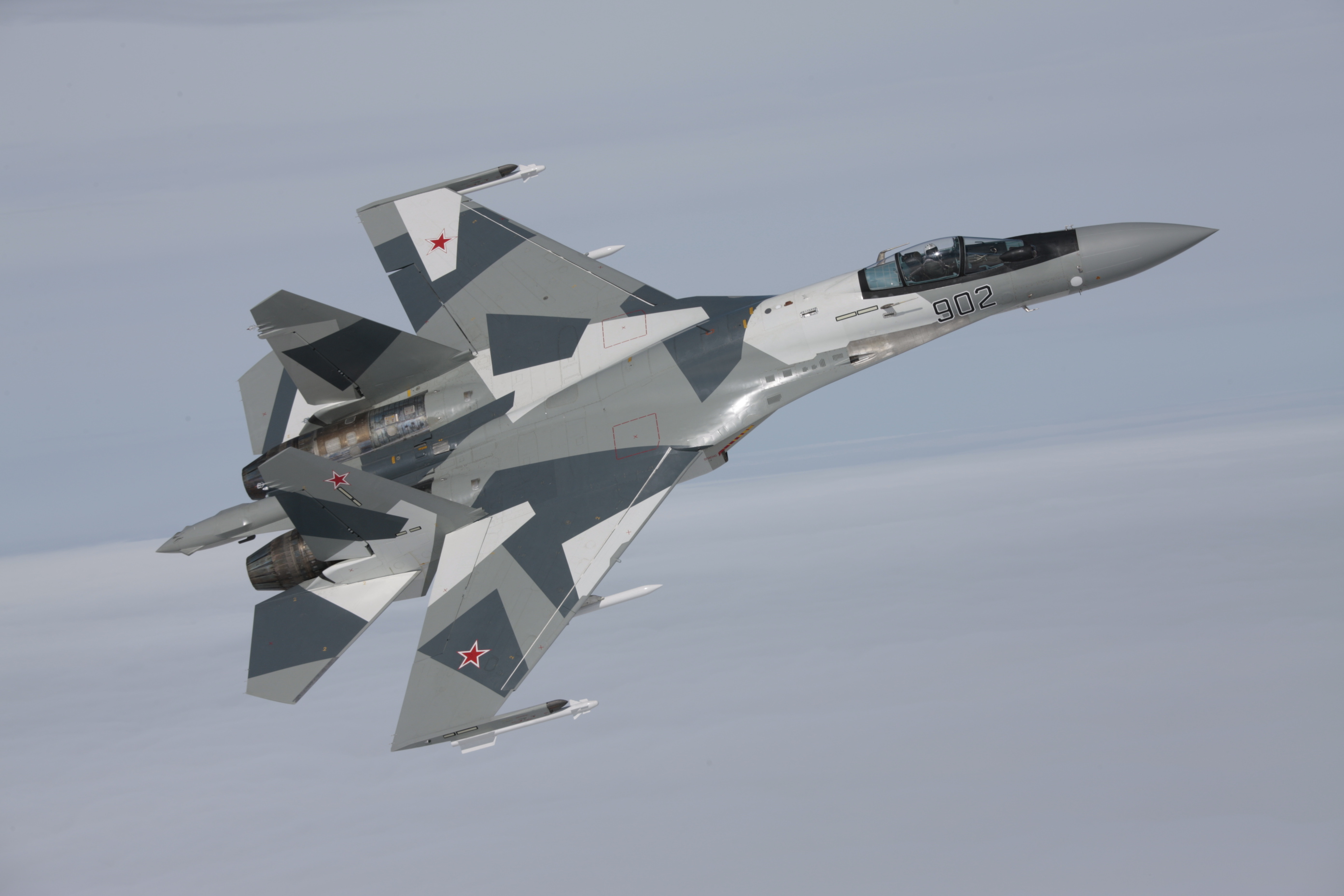 we have managed to deliver abroad more than 800 combat aircraft, including assembly kits for licensed production, more than 1000 military and civilian helicopters, and air-to-surface weapons totalling over $40 billion, as well as air defence systems worth over $25 billion since the company’s establishment in 2000,” added Alexander Mikheev.

Russian Helicopters Holding Company (part of Rostec) presented a convertible Mi-171A2 helicopter at the show. Depending on the customer need, the helicopter can be used for both cargo transportation and (up to 20) passenger, search and rescue missions, medical evacuation, and others. The scope of the helicopter usage may further be extended by installing a set of search and rescue equipment, that is, windlass, searchlight, external sling, medical equipment.

This is the first certified rotorcraft of the Mi-8/171 family in a convertible version.

The Ka-62 multi-purpose helicopter will make its debut at the show. It will be part of the Russian Helicopters’ fly-by and aerobatic program of the show.

"The Ka-62 project implements a number of fundamental innovations that had not previously been used in Russian helicopter engineering. In particular, it features a non-standard rotor design, and composite materials are widely used in its structure, which increases the manoeuvrability, flight speed, economic efficiency and load-lifting capacity of the rotorcraft. The helicopter will occupy the niche between the light-weight Ansat, Ka-226 and medium-sized helicopters of Mi-8 type,” commented Anatoliy Serdyukov, Aviation Cluster Industrial Director of the Rostec State Corporation.

The Mi-38 helicopter made by the Kazan Helicopter Plant will be presented at a static exposition. It will also take part in the flight program forming part of the airspace show by making a flight with other civilian aircraft made by Russian Helicopters. Pre-production prototypes of Mi-38 had been previously demonstrated at MAKS. They took part in the certification flight test program. Besides, the Mi-38T military transport helicopter based on the certified civilian Mi-38 helicopter takes part in the flight program of the exhibition for the first time. 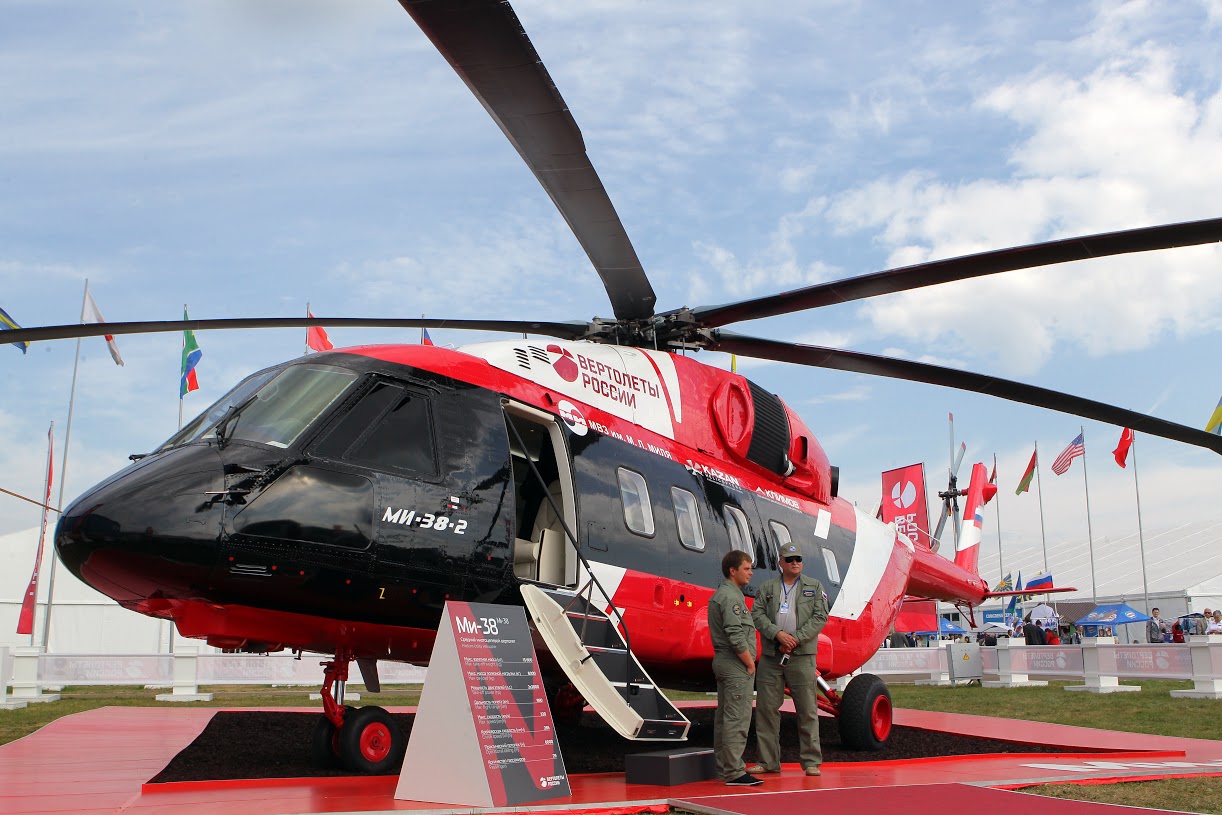 "Mi-38 is a new achievement in the Russian helicopter industry. Due to its performance, cost-effectiveness, flight range and cargo transportation capabilities this helicopter is an extremely interesting one in terms of commercial operation and for state customers. Currently, certification tests of the Mi-38 helicopter with a highly comfortable cabin have been completed, and we are ready to begin to supply these machines. We are conducting negotiations with a leasing company now," said Director General of Russian Helicopters Holding Company Andrey Boginsky.

A passenger version of Mi-38 can accommodate up to 30 passengers and up to eight passengers luxury cabin. The flight range of the new helicopter is up to 1,300 km (with additional fuel tanks). Mi-38, with a maximum takeoff weight of 15.6 tonnes, can carry five tonnes of payload on-board or on an external sling. 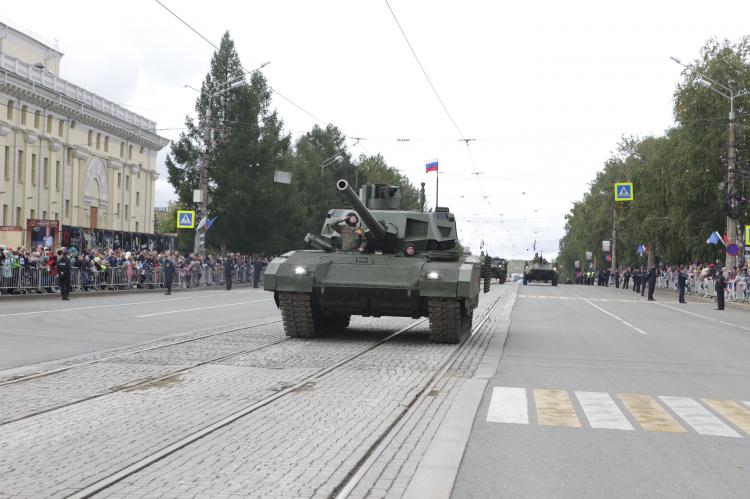