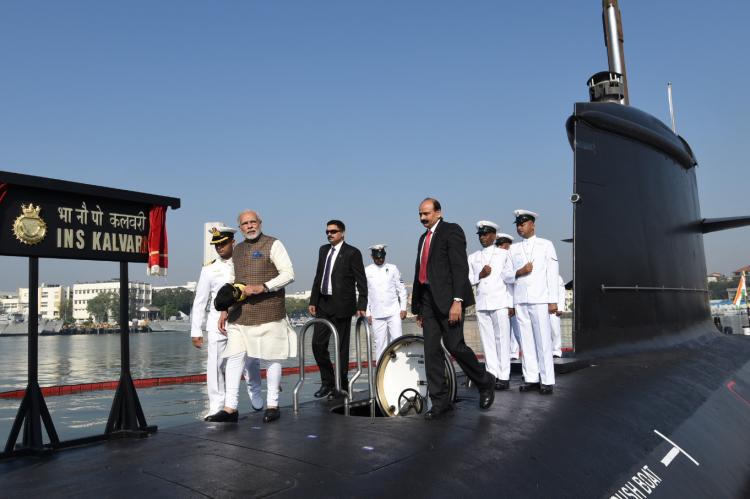 Indian Navy’s submarine arm celebrated 50 years of Golden service to the nation on December 8, 2017, commemorating the date in 1967 when India’s first Foxtrot class submarine INS Kalvari, was commissioned at Vladivostok. And a week later, Prime Minister Narendra Modi with fanfare commissioned Navy’s first Scorpene submarine of the Project 75 also named INS Kalvari on December 14 at the Mazagon Dock, Mumbai. The French-designed vessel is equipped with SUBTICs command and control system and SM-39 Exocet anti-ship missiles. The Kalvari was delivered four years behind the schedule with substantial cost escalation. The torpedo selection for the submarine is pending.

No foreign or Indian defence deal in India signed by Ministry of Defence (MOD) has ever met its deadline and most large deals have been mired with allegations of corruption including the recent ‘Off The Shelf 36 Rafale deal’, now in Supreme Court and steered personally by the Prime Minister. In most of these cases, the money trail has never been proved. This harms the nation’s defence preparedness.

But what has harmed India’s underwater attack and defence capability most is the fact that by 1994 India had become a world-class conventional submarine builder by constructing two HDW-1500 boats INS Shishumar and Shalki with Atlas SUT-B wire-guided torpedoes at Mazagon Dock’s East Yard, but further planned submarines were cancelled. HDW got mired in corruption charges and was blacklisted, but no wrongdoing was ever proved.  A Vice Chief and Commodore of Indian Navy suffered ignominy at CBI’s hands.

The highly qualified 150 officers and many sailors who went to Kiel and Lubeck and trained at Professor Gabler’s Submarine Design Institute as welders, artificers and engineers of Mazagon Dock and Shipbuilders Limited (MDL) and Indian Navy became redundant. East yard at MDL was neglected. It was a loss to the nation. India’s submarine strength began dwindling from a high of 20 submarines as the Russian Foxtrot class boats began to get de-commissioned from the Indian Navy.

In 1997, Navy tabled a two-line 30-year submarine building programme with details and timelines which were accepted by the Government. It was only in 2005 that a six Scorpene conventional submarine programme with six more on option for building in India at MDL with Armaris a combine of Navantia and DCNS was set in motion. However, the contract was flawed and MDL could not supply items it had signed (under duress). The items were later imported which led to the cost escalation and delayed delivery of the submarines. Navantia walked out.

Finally the first DCNS (now Naval Group) submarine INS Kalvari was commissioned on in 2017 with a promise of one submarine a year which has not happened. The second boat INS Khanderi is due for its commission in 2019. One ageing Kilo class is reported to be in refit in Russia and INS Sindhukesari has just returned after a two-year refit at Zvezdochka in Severosnisk at Rs 1197 crore and two of the four Shishumars (HDW) are in for conversion to fire Harpoon missiles.

Now almost over a decade after sanction of the second line of six advanced conventional submarine with Air Breathing Propulsion (AIP) and missiles under Project 75India submarines by the Defence Acquisition Council (DAC) on January 31 approved the project “at a cost of over Rs. 40,000 crore” “under the MoD’s ambitious Strategic Partnership (SP) model that aims at providing a significant fillip to the Government’s ‘Make in India’ programme.” This means a major Indian shipbuilder will be given the opportunity to execute the project with a foreign submarine partner builder, which it can select.

The submarines will be fitted with anti-ship cruise missiles for which the light air-launched BrahMos missile is in the running as it has been tried in a launch from an underwater platform and along with latest sonars and other weapons, in make in India effort. Reportedly, earlier this month, India issued Expression of Interest (EoI) to foreign vendors interested in the project.

An empowered committee appointed in January to implement the mega project has already held consultations with short-listed Indian defence majors which includes the Adani and Reliance Defence, Larsen and Toubro (L&T) which has an understanding with Navantia and Russia’s Amur builders, and is constructing the Arihant class nuclear submarines at the Ship Building Centre (SBC) at the Naval Dockyard in Visakhapatnam, and also in the run is Mazagon Dock Shipbuilders Ltd (MDSL) which claims it has the capacity and capability as it is building the Scorpene class and French Naval Group has offered an advanced Barracuda design.

It may be noted the pending four ships Landing Platform Dock (LPD) project was the first naval sanctioned project to be moved  under the strategic partnership model six years ago which has L&T  and Reliance for one each but despite the Request for Proposal (RFP) and finance bids already replied, the project has not moved.

As per submariners’ motto, ‘Run Deep, Run Silent’, Defence Research and Development Organisation’s (DRDO) Project Akakshanka (Hope) earlier called ATV,  toasted the launching of India’s second nuclear SSBN submarine from its flooded dock by Defence Minister Mrs Nirmala Sitharaman in 2017 a low key event at the classified Shipbuilding Building Centre (SBC) at Vishakapatnam. Media named her Arighat (Blessed Attacker). She is larger than the first 6000 ton INS Arihant with an extra missile plug and has more content by Indian companies and will be armed with (DRDO) eight K-4 (Kalam) nuclear-tipped ballistic missiles with a longer range of 2,500 km, with radar and GPS homing, and will carry torpedoes. She will now complete harbour trials and test fire her scaled up from the 83MW reactor, before proceeding for sea trials. Arihant’s reactor was fired for criticality by BARC’s Dr Usha Paul, later decorated for her work in designing the reactor’s parameters and a feature called SCRAM for safe shutdown of the nuclear reactor in an emergency.

Arighat’s hull was assembled by Larsen &Toubro Ltd (L&T) in a public-private partnership (PPP) with DRDO in a dry dock in a large shed at the SBC which stands leased to L&T, which has its Heavy Engineering Unit at Hazira, and a shipyard at Tuttalpulli near Ennore. The submarine has been built in modular blocks with the integrated hull outfitting and painting (IHOP) technique. The completed blocks are transported with heavy cranes and joined by qualified welders with x-ray checks for watertight integrity under Russian consultancy, as submarines dive deep and have to withstand heavy pressures. L&T executed the work under Naval Director Generals Project Akakshanka which has a testing facility called DMDE at Hyderabad for quality control. A board in Prime Minister’s Office (PMO) and NSAs with the Strategic Force Commander (SFC)  monitor the progress.  Funding is not disclosed.

The submarine’ enriched uranium nuclear reactor is supplied by Bhabha Atomic Research Centre (BARC) with parts supplied by industries like Walachandnagar Industries, Godrej and other small and medium enterprises. The turbines and heat exchanger system are supplied by the public sector major Bharat Heavy Electricals Ltd (BHEL).  The slender command console which is lowered through the conning tower is supplied by a Tata Advanced Systems -BAE collaboration. Bharat Electronics Ltd (BEL) and many Indian industries and ECIL are involved in supplying the communications and electronic equipment, heavy duty pumps and compressors that fill tanks for diving and empty tanks for surfacing. This gives hope that the Project 75 India if steered well can succeed. There are opportunities for exports too in the coming years as Navy had hoped to export Shishumars!

*Author is a retired naval officer.