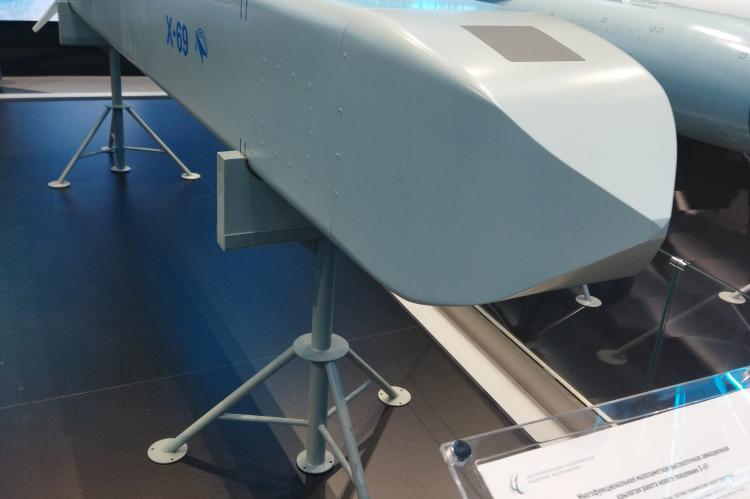 One of the cornerstones of the Russian defence industry is its ability to produce a large variety of cruise and tactical missiles. The country has been a pioneer in missiles for attack and defence both. Its S-series namely S-300 and S-400 have been the trendsetter in air defence systems and so has been its anti-ship cruise missiles like klub, Kalibre, Yakhont and tactical missiles like Kh-59, Kinzhal, Iskander etc.

Keeping in line with the reputation, Russia during the Army 2022 unveiled the Kh-69(X-69) multifunctional stealth air-to-ground high-precision new generation cruise missile with a range of 290 km to the world market. The X-69 is designed to destroy a wide range of fixed targets, including those without radar, infrared and optical contrast to the surrounding background, with known location coordinates, and with previously known information signs of the target area.

The X-69 missile is indistinguishable from Kh-59MK2, an advanced version of Kh-59 – a cigar-shaped air-to-ground missile family. The modern stealthy square cross-section body of X-69 reportedly comes with radar absorbent material and can pack more fuel and heavier payload. This design also helps in packing foldable wings which allows the missile to maintain its stealth profile for some distance after launching from the air.

In 2018 during the Syria campaign, Kh-59MK2 had its maiden launch from the Su-57.  One cannot deny the renaming of the missile. But the information available in the public domain suggests the X-69 may have improved technologies over Kh-59MK2.

Designed specially to fit in the internal weapons bay of Su-57 by the Raduga Design Bureau (GosMKB) for the Tactical Missile Armament Corporation (KTRV), the X-69 is compatible with other Russian legacy and upcoming fighters and bombers like Su-75, Su-30MK, Su-34, Su-35, MiG-35, MiG-29K.

According to information made available by the company, the missile is compatible with aircraft equipped with an ejection device of the AKU-58 (UVKU-50) type.

The terrain-hugging missile can fly within an altitude of 50 – 300m with a speed of 750 – 1000 km/h carrying a warhead of around 300 is expected to hit any target with the circular error of probability (CEP) of 5-7 m using navigation and automatic control system based on a strap-down inertial system, integrated with the navigation equipment of the information consumer of commercial channels of satellite navigation systems GLONASS and GPS NAVSTAR.

The missile comes with two warhead options - penetrating high-explosive or cluster ammunition- which marks out that it can engage a variety of targets from communications, industrial, transport, ammunition and other military infrastructures including airfields, fuel depots, as well as naval targets. The cluster warhead can eliminate armoured, missile, communication, and air defence formations deployed in the tactical battlefield area.

The inclusion of X-69 missiles in the armament makes it possible to increase the combat potential of aircraft in modern conditions and ensures the fulfilment of most combat missions of aviation formations in the nearest operational and tactical depth of up to 300 km.

The flight profile and navigation system of the missile allow it to engage targets with much accuracy as it employs multiple navigation systems which can help it lock-on-before-launch and neutralise targets while keeping a terrain-hugging flight path through active and deployed enemy air defence systems.  These features allow the missile a high survival rate in a contested air space across over the horizon targets.

The declared range of the missile is 290 km but since it is powered by a turbojet engine similar to missiles like Kalibre one cannot deny the Russian military version can have a longer range or in future, we may witness a much extended-range version.