Why Woman Are Not Suitable for Deployment in Combat Arms 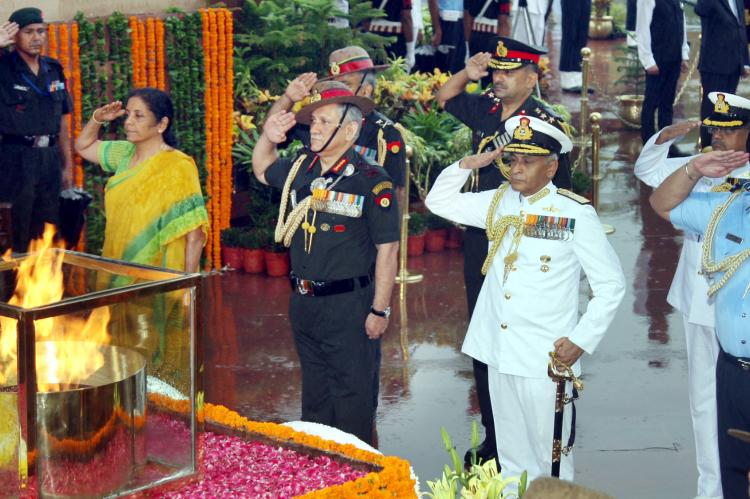 There is a debate on why a woman should not be deployed in combat arms. This issue needs to be looked at from the operational imperatives and service conditions rather than looking at it from a gender biased approach. It is important to understand how young officers are groomed to be able to lead their men till death, an ethos that requires a close physical and mental connection with the men. This connects come by living and competing with the men that a woman may find difficult to do so.

When I took over the command of my unit, I told my officers, “Sweat together to bleed together” and “Train together to fight together”. To lead men in war require identifying as one of them. Trust and faith to die for each other do not come by wearing rank and walking up to them on the day of the judgement. When men are thrown to the wolf, in an uncertain environment, they look up to the officers who can convert their fear and apprehensions into strength and an undying spirit. Men are not machines; the trust is built on the physical and mental robustness of the officers when they train together in peace and field.

To make a leader in the combat arm is a nuanced process. To be an officer is one aspect and to be a leader of the men is another. When a young officer walks into the combat arms unit, he is made to live with the men as a soldier and performs all duties that a soldier is required to perform. He sleeps in the barrack, he eats with them, he plays with them and rubs shoulders during games and training. He is exposed to the men and they know if he is capable of leading or needs to be polished further. Vikram Batra, Manoj Pandey and Shaitan Singh were the product of this tradition of grooming a young military leader in combat arms and the nation will remain proud of them for eternity.

During formative years young officer is part of various competitions along with his men. He is required to go on LRP for the long duration where he is supposed to share his small pup tent with his buddies, eat from the same plate and take bath in the same stream where men take bath. If you are part of the Armoured or Mechanised Regiment you are sleeping and training with the crew day and night. There are no barracks in a desert when you are out for training. A tank is your home and side of the tank is your bathroom. There is no luxury to have a separate caravan while on the move. Similarly, when you are out with your Artillery Regiment you sleep in gun position along with the gun crew and when you are operating as Arty Op or forward observation officer, you are with leading infantry columns. Living the way men are living along with your radio operator beside you all the time.

When you get hurt or sprain your body parts, it is your buddy who would help you in everything including going to toilets. I do remember when a senior JCO told me that the young officer still has baby fat on him and he needs to be polished to become a commander of his men. Officers returning back from leave are often ticked off by CO or 2IC for being overweight. But telling a woman to reduce weight and get fit could be considered as chauvinist’ remark.  As a young officer, you are required to compete every day with men during PT and games. Play troops game and push and shove each other in the contest for being better than the men. After he has done it all he is considered fit to lead men. Lives of men can be trusted upon him once he is found suitable to lead men in combat. These activities develop trust, faith and moral contract of unlimited liability as an officer towards men. The command is personal and you cannot make men lay down their lives on orders, it requires mutual trust and deep understanding of each other’s capabilities. Regimental ethos is drilled into young officers by men and not by officers. Men are ready to do impossible when they know they are being led by tigers who will risk their lives before harm is brought upon his men. This faith comes when you are capable of roughing it out with the men. It is the senior JCO and Platoon Havildar who trains the young officer and give their opinion if he is fit to lead men on independent missions or not.

In combat and war, for weeks and days, you are away from your basis and sleeping, eating and huddling together with the men in behind rocks and bushes. In ambush you cannot even go away to relive yourself, it is in-situ or else you will either be shot by own men in the darkness or ambush would be compromised. There are no changing rooms, there are no toilets, and you have to change clothes in the open in front of your men. I do remember as a company commander and as a CO, during operations when you wish to go to attend nature's call, you are escorted by your buddy or else you may be shot by the terrorists. In field more often you walk into your men’s bunks and play with them chess or carom. During cross LOC firing officers even sleep in the bunkers along with the men for days together. Question is not that women are any less in physical attributes but combat is all about trust, faith, personal rapport and contact with the men. It is considered a great gesture of affection and concern for men when officers put a hand over the shoulders of men even while informal interaction. Punching playfully on the chest or stomach of fellow soldiers is a sign of proximity and intimacy. It is a sign of trust and comradery. As a CO in combat, you hug and put hands around the neck of your men to tell them that you are with them. This connect was the trademark signature of FM Sam Manekshaw. In combat arms, there are no concessions as far as physical attributes are concerned if you cannot cope up with the men you may risk their lives in operations. At times as an officer, you have to carry or support your men and their loads and every good company commander would have done it during his service.

Not giving combat role to a woman is not gender discrimination, but there are practical issues and woman certainly are not yet ready unless they are part of a woman subunit. During the war, there are chances where an officer can become a prisoner of war (POW). The treatment to a woman as PWO can be an outrageous and national embarrassment. Similarly, in CI/CT and deployment along LOC, one has to be prepared to fight it out alone and if a woman officer is captured and killed, mutilation is traumatic and embarrassing. Even in UN Missions, there are protocols and women are not deployed in the field due to operational conditions.

The debate of deployment of a woman on combat duties is becoming fashionable and a sign of woman liberation against gender bias. But there are operational imperatives and conditions that do not allow a woman to get deployed in a combat role. It must not be misunderstood with logistic issues but it is more for operational issues and pre-requisites for preparation of combat leaders. Leading men in war is not by authority but by belief and trust that you gain from your men by rubbing shoulder with them. The ethos in Infantry is either you are able to walk ahead of your men or you will be left behind to face humiliation.

The author is a distinguished fellow of United Services Instititution of India.