The ongoing Russo-Ukraine war has many firsts, one of them being the interception of rocket artillery by air defence systems. In the beginning of the war the world witnessed effectiveness of the unmanned aerial systems (UAS) against land targets and how effectively armoured can be neutralized by them. Military analyst across the globe predicted Russia meeting similar fate as Armenia. But the Russian air defence corps has learned the right lessons from Armenia war and is able to effectively neutralize enemy’s UAS’.

As the war progressed and entered into the pitched land battle where artillery, especially the long-range rocket systems, was dominating the battle field, Russia begun to claim to intercept the Ukrainian artillery rockets.

According to Russian government data of June 27-July 24, air defence forces have intercepted 186 rocket projectiles fired by Ukrainian multi-rocket launching systems (MRLS). This also includes HIGH Mobility Artillery Rocket System (HIMAR) projectiles. The first reporting of HIMARS interception is in the areas of Novonikolayevka and Alekseyevka on July 24. Till July US has delivered 16 HIMARS systems.

According Russian media reports, Buk-M3 (Export version ‘Viking’) is being credited for HIMARS interception. Quoting army officers, in know of the incident, Russian media claims that the HIMARS projectile are difficult target for interception as the rockets  with short range, small radar signature, fly high and fast  which make them difficult to intercept. In spite of limitations, Russian air defence has worked out method to intercept.

It was publically not known before that Buk-M3 system can intercept rockets.

The US made HIMARS was expected to tilt the balance in Ukraine’s favour as the systems were expected to provide precision deep strike capability. In the long-range artillery war of attrition, the fire and scoot HIMARS MRLS was the weapon of choice for Ukraine to effectively neutralize Russian artillery weapons, command centers and entrenched troops. With all its specification, HIMARS have failed to change the course of war.

The possibility of neutralizing long-range rocket artillery with effectiveness has serious implications on the battle-field. Let’s look at the Kargil War (1999) where Indian army used rocket artillery – Grad-21 and Pinaka - with ease against the entrenched Pakistani soldiers. In future, if a similar situation arises and Pakistan has the ability to intercept even a fraction of artillery rockets, this will seriously diminish the effectiveness of Indian firepower. The same hold true for India.

Till now, the world has been preparing for anti-ballistic missile but it is time major nation starts to gear up for anti-MRLS defence system. The case in point is Iron Dome of Israel.

HIMARS is designed to support joint early and forced entry expeditionary operations with high-volume destructive, suppressive and counter-battery fires. When firing GMLRS-Unitary precision rockets, HIMARS can achieve ranges of 70-plus kilometers, attacking the target with low-collateral damage, enabling danger-close fires (within 200 meters) in support of friendly troops in contact, as well as engaging high- valued point targets in open, urban and complex environments. Development efforts include establishing a Common Fire Control System between the HIMARS and MLRS launchers. The Army fleet expansion effort plans to increase the HIMARS fleet.

BENEFIT TO THE SOLDIER 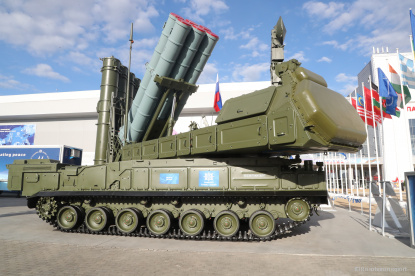 Buk-M2E is a medium-range SAM system designed to engage strategic and tactical aircraft, helicopters, cruise missiles and other aerodynamic aerial vehicles throughout their whole altitude envelope.

This is ideal for providing air defence for troops (military installations) in various types of military operations, administrative and industrial facilities and territories of the country.

Viking is capable of hitting aerodynamic targets, tactical ballistic missiles and ground (surface) radio-contrast objects. The system is capable of autonomous use of self-propelled firing systems.

"Viking" medium-range ADMS is designed for air defense of military facilities and troops in the theatre against massive air strikes of prospective means of air attack in contested electronic and fire-intensive environment.

The system provides for engagement of the aircraft with radar cross-section area of 2 sq. m:

The slant range against tactical ballistic missiles up to 25 km

Range against cruise missiles up to 20 km