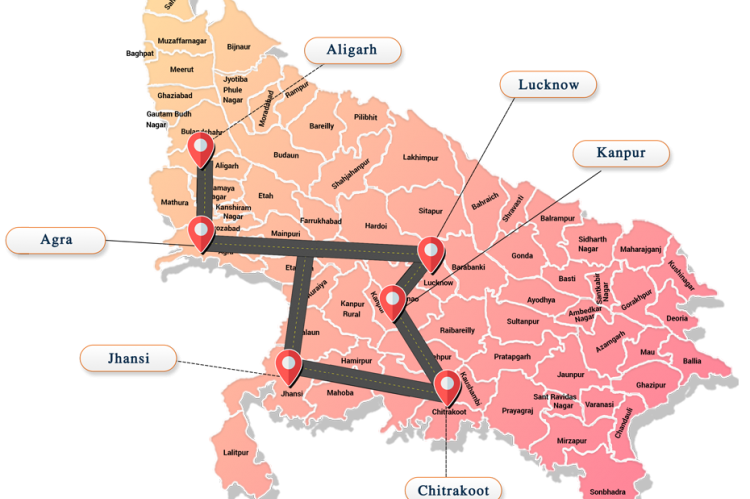 Thousands of people to get permanent employment in the corridor covering Lucknow, Kanpur, Chitrakoot, Jhansi, Agra and Aligarh districts

Two companies, namely Encore Research Lab LLP and Allen & Alvan Private Limited are investing Rs 550 crore and Rs 30.75 crore respectively to set up their plants in the Aligarh node of the Defence Corridor to make drones for the Army and the security forces at large.

The Uttar Pradesh Expressways Industrial Development Authority (UPEIDA) has already allotted 10 hectares of land to Encore Research Lab LLP Company and to Allen & Alvan Pvt Ltd and the companies will start construction of their units soon.

The demand for drones is increasing rapidly in India for its multipurpose use, such as disaster management, security, agriculture, business, media and for delivering goods and medicines in flood affected as well as remote and inaccessible areas.

It is noteworthy that Prime Minister Narendra Modi had announced the creation of a Defence Corridor in UP during the Investors' Summit held in Lucknow in 2018. Subsequently, the Yogi Government took concrete steps to establish Defence Corridor in UP covering Lucknow, Kanpur, Chitrakoot, Jhansi, Agra and Aligarh nodes.

Later on, domestic and foreign companies related to defence products signed memoranda of understanding (MoUs) worth Rs 50,000 crore for investment in the Corridor during the Defence Expo held in Lucknow in 2020. Most of the MoUs have been signed for the corridor being built in Andla on Khair Road in Aligarh.

CM Yogi  has directed officials to ensure that the potential investors in the Defence Corridor did not face any hurdles in procuring land, or in other procedures for setting up their units. The CM’s efforts have yielded positive outcomes as many companies have lately shown keen interest in setting up their plants in Lucknow.

According to UPEIDA officials, altogether 29 companies have submitted their proposals to the Government for setting up factories in Aligarh node and have requested for land. Eleven companies in Lucknow node, six in Jhansi and eight in Kanpur node have requested for land to set up their plants. Acting on the proposals received from various companies, UPEIDA has so far allotted 55.40 hectares of land to 19 reputed companies in the Aligarh node. These 19 companies will invest Rs 1245.75 crore to make defence equipment.

According to the  officials, the land allotment work has been completed in Aligarh node. Defence experts have said that all defence products ranging from drones and weapons to uniforms will be manufactured at the Defence Corridor in UP.