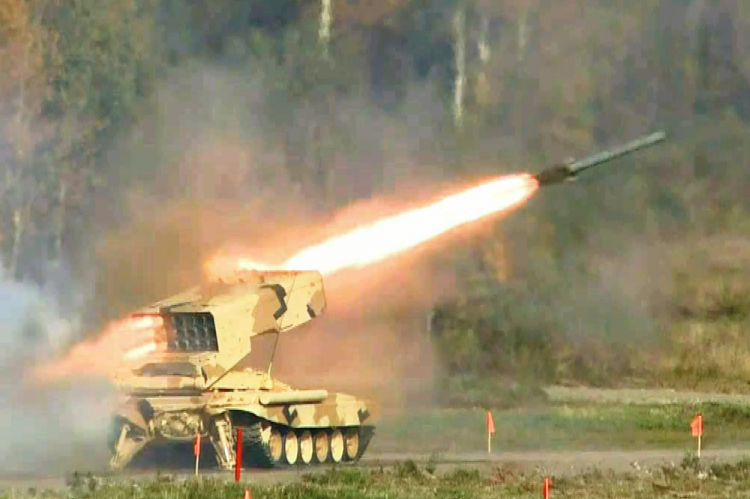 As the Russo-Ukrainian wars entered into a second week and the pace of Russian forces marching to Kyiv slowed down, the defence analysts started anticipating heavy bombardment by Russian forces to break the morale and spirit of Ukrainian at the frontlines. Defence Analysts were predicting employment of Russian TOS1 – thermobaric multi-rocket launchers, known as heavy flame throwers in Russia.

Many videos of explosions from Ukraine claimed to be of TOS1A on social media. It is almost impossible to prove the veracity of those videos. The weapon system has received unusual attention. Not being one of the better-known weapons from the Russian arsenal, TOS1A is a very effective and devastating weapon system.

The first version of the rocket artillery was operational in 1987 at the fag end of the Afghan war, based on the chassis of T-72 TOS1 ‘Buratino’ was a 220 mm 30 barrel thermobaric rocket system with a range of 4000m, and designed to annihilate fortified enemy positions which were difficult for main battle tanks.

The TOS1 fires rockets with thermobaric (lit. heat-pressure) or fuel-air-mixture (FAE) warheads when explodes release fuel in the air subsequently explodes in reaction with air giving out extreme heat and pressure. In this kind of weapon, the warhead is almost 100 per cent fuel without any oxidizer.

In thermobaric weapons, there are two parts in the warheads, first a smaller explosive (scatter charge) explodes to spread the fuel in the environment. There is no explosive left after the FAE explosion, generating immense heat and pressure.

The TOS1 was first used in Panshir valley(1987) during the Afghan war and later in the Chechen War.

Russia, in 2003, introduced TOS1A Solntsepyok, an improved version with 24 rockets on the T-72A tank chassis with 6000m range. The additional 2000m made it safer from the anti-tank missiles of the previous generation. It is important to remember that Russian tanks are smaller than their western counterparts and are not visible beyond the 3000m range.

According to the Rosoboronexport (RoE), “the BM-1 combat vehicle is a multiple rocket launcher mounted on a tank chassis. It is equipped with a fire control system, which includes: a laser periscope sight/rangefinder, a digital dedicated computer system with a sensor package, power electro-hydraulic actuators and firing equipment. The BM-1 is also fitted with auxiliary systems and equipment (means of communication, observation instruments, NBC protection system, fire-fighting equipment and self-entrenching equipment).

The TZM-T/TZM (563K) transporter/loader is fitted with rocket cradles, a hydraulic loader crane, a removable ammunition armour kit, and loading facilities. The TZM is based on the chassis of a KAMAZ-63501 truck.

Both BM-1 and TZM carry 24 rockets each.

On the impact of the TOS1A, the US Army’s World Equipment Guide (2011) says “a variety of enhanced blast mixtures (varying from improvised from common materials to sophisticated) can be used to produce thermobaric or fuel-air explosive (FAE) effects. The sophisticated mix for TOS-1 may be enhanced with powdered tetranite.”

“The primary FAE effect is a long duration high-pressure blast wave which creates a vacuum - then precipitates a reverse wave. These pressure/vacuum surges (up to 427 pounds per sq inch) cause a ripping effect on soft materials (such as aeroplane skin, radar surface, human lung tissue). Walls and surfaces within the affected area do not necessarily shield victims, rather causes multiple pressure waves, which amplify the tearing effects and can topple structures. A secondary effect is a high-temperature heat - 2,500-3,000° C. An incomplete explosion renders a near-devastating effect, wide-area long-duration high-temperature flame.”

RoE claims that at the maximum firing range, TOS1A can destroy (unsheltered and sheltered) 40000 sqm of area. The rocket system can fire all of its 24 rockets within 6 seconds in the paired launch and within 12 seconds in a single launch. The system can be prepared for launch within 90 seconds.

TOS1A saw combat in 2016 in Iraq where it was employed to liberate Mosul from ISIS. In the same year, Russian forces used it very effectively in Syria.

The Syrian Army tanks (mostly T-72) were hunted down by Islamists using western anti-tank missiles in the urban environment. TOS1A were employed to neutralize the Islamist urban strongholds.

In 2020, TOS1A was deployed by both sides during the Armenia-Azerbaijan war.

In recent years, a lighter and more mobile wheeled version, based on Ural-63704-0010 (6x6), TOS2 with 18 missile tubes became operational. This version uses the same rockets as its tracked compatriot.

The wheeled version is armed with a hydraulic crane for reloading missiles from the ground and supply trucks. In this way, it is a self-sufficient unit.

Learning from the Syrian experience where terrorists had over 5 km range anti-tank missiles, Russia has developed a 10 km range rocket for TOS1A. In 2020, the Radiation, chemical and biological protection troops of the Russian Army test-fired these new rockets in a military drill in Siberia.

The extended range of 10 km will allow it to neutralize targets at a relatively safe distance from the modern anti-armour missiles with over 5km range. The extension of the range also increases the dead zone range within which it cannot attack- of the system from 600 m to 1600m.

Saudi Arabia, in 2017, signed a contract with Russia for import and local manufacturing of the TOS1A.

As the world is getting accustomed to urban, grey zone and hybrid wars where nations face militias based on communities overwhelming the conventional armies with sheer numbers, as the world has seen in Afghanistan, Iraq, Syria, it is pertinent for militaries to acquire systems that can provide devastating firepower to them.

Although, there are voices who call for a ban on the thermobaric weapon yet one cannot deny their utility as a defensive system against overwhelming enemy forces.

A system similar to TOS1A would be of much use to India in circumstances where Pakistan mobilizes all of its Islamic militia along with its conventional army. It has faced two such incidences, both in Jammu and Kashmir, in 1965 and 1999.

Given the massive military built-up by both sides on the Punjab and Jammu border, in the proximity of population, in case of mobilization of armed forces and militia at once by Pakistan, as in 1947, it would be a massive challenge as Indian defensive line would be under risk of getting overrun.

A thermobaric rocket system would be the best option for the Indian military to defend its frontlines.