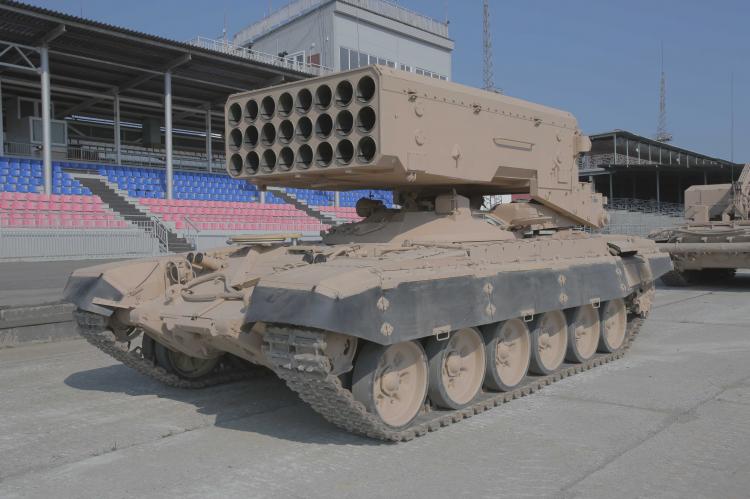 JSC Rosoboronexport and JSC Omsktransmash (part of JSC Concern Uralvagonzavod), which are subsidiaries of the Rostec State Corporation, have demonstrated the TOS-1A heavy flamethrower system to a number of foreign customers at the Nizhny Tagil Institute of Metal Testing's (NTIIM's) Staratel Proving Ground in Nizhny Tagil.

"The TOS-1A heavy flamethrower system is unique to the world arms market, the only deadly short-range fire support weapon in the world. Such equipment is not produced anywhere in the world except Russia, and we are proud to show it to our foreign partners. The system has repeatedly shown its impressive capabilities to destroy well-protected terrorist groups in real combat conditions in the Middle East. Owing to its unrivalled performance, the TOS-1A has held steady in the Top 5 weapons supplied by Rosoboronexport to customers’ land forces,” said Rosoboronexport’s Director General Alexander Mikheev.

During the demonstration at the Staratel Proving Ground, the TOS-1A system has accomplished all its tasks. Visual observations and express data analysis substantiated its performance and the reliability of engaging targets at different ranges.

"The TOS-1A showed its best performance and high fire efficiency at the test site. Its effectiveness and firepower have been long recognized all over the world. It is a unique R&D product in terms of the technical solutions applied and combat effectiveness,” said Alexander Potapov, Director General of JSC Uralvagonzavod Concern.

The TOS-1A heavy flamethrower system is in service not only with the Russian Army, but also with the armed forces of several countries of the world. Unlike all currently existing multiple rocket launchers (MRL), only the BM-1 launch vehicle of the TOS-1A system, having MBT-level armor and a minimum firing range of 600 m (maximum range of 6 km), can perform the necessary combat missions on the forward edge of the battle area (FEBA) in a very short time frame, while remaining practically invulnerable. This is a deadly, time-tested and unrivalled flamethrower system whose high reliability has been proven more than once.

All existing MRLs have an order of magnitude longer minimum firing range and are located at considerable distances from the FEBA. The TOS-1A operates within the combat formation of troops, which reduces the targeting time and increases the efficiency of fire control. These systems are capable of delivering both indirect and direct fire on visible targets almost immediately after their detection.

According to Igor Lobov, Director General of Omsktransmash, the TOS-1A developer and manufacturer, “the tank chassis provides tactical mobility and a high level of crew protection, and also makes it possible to quickly move to the required firing position and operate in the zone of direct fire contact with the enemy, which no artillery system can do.”

The BM-1 launch vehicle is a 220 mm 24-barrel launcher mounted on a tracked chassis. It fires unguided rockets developed by Ganichev NPO SPLAV (part of the Rostec State Corporation). The rockets are equipped with a thermobaric warhead capable of engaging heavily protected enemy positions, including fortifications, with minimal means. A full salvo, lasting just a few seconds, is capable of destroying enemy forces over an area of ​​40,000 square meters.