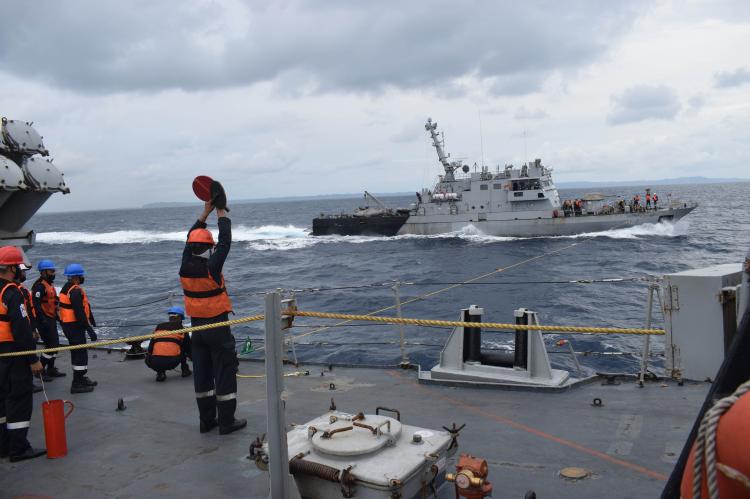 The fourth of December is celebrated every year as the Navy Day. The day has great significance in the history of the Nation and Indian Navy as it marks a decisive victory for India when the Missile boats of the Indian Navy during Operation Trident, in the 1971 India-Pak War, successfully fired their missiles onto ships, oil installation and shore defence installations of Pakistan at Karachi. During the 1971 operations, the Indian Navy sunk many Pakistani ships carrying war sustenance efforts and critical stores. The fighter aircraft from the deck of INS Vikrant, struck at the enemy harbours and airfield at Chittagong and Khulna, destroying ships, Defence facilities and installations. Both the Missile strikes at Karachi and air attacks from Vikrant led to the defeat Pakistani Forces in East Pakistan.

In the year gone by, ships and aircraft of the Indian Navy have relentlessly patrolled the oceans. Ships of Andaman and Nicobar Command (ANC) maintained uninterrupted vigil at the Straits of Malacca, one of the busiest shipping lanes in the world, which is just 80 Km South of the A & N Islands. Despite the COVID 19 pandemic our ships had operated and exercised with navies of friendly neighbouring countries towards reaffirming better understanding, synergy and cooperation in the region. Ships of the Command participated in ‘Mission Sagar’ and ‘Samudra Setu’ providing support and transporting a large number of personnel from abroad and within the country to tackle the unprecedented humanitarian crisis due to the pandemic. INS Kesari from ANC distinguished itself during the deployment ‘Mission Sagar’, ferrying over 500 tons of emergency rations and medical aid along with specialist medical personnel to many island countries of the Indian Ocean Region. Naval assets provided assistance to the    A & N Administration to support the Islands in numerous ways.

To commemorate this significant day and to enhance general awareness about the Indian Navy, a host of community outreach activities, fanfare and elaborated ceremonials are conducted by the Indian Navy every year. However, due to the prevalent COVID-19 pandemic situation and associated restrictions, the events planned for the Navy Day this year have been curtailed. This year’s planned activities in the Andaman and Nicobar Islands include the traditional Wreath Laying Ceremony at the war memorial to pay tribute to the brave soldiers who were martyred in the 1971 war and all bravehearts who have made the supreme sacrifice in the service of this great nation. Various community outreach activities were/ have been organised to provide assistance to underprivileged and needy children and a webinar for school and college students to apprise aspirants on prospects of joining the Indian Armed Forces. Illumination by Naval ships near Marina Park, display of posters & banners and screening of a Navy telefilm at prominent locations such as the Veer Savarkar International Airport as well as on mobile platforms are also planned.

The ‘Combat Ready, Credible and Cohesive’ Indian Navy is unflinchingly committed towards safeguarding the maritime interests of India and re-dedicates itself to the service of the nation and its people on the occasion of the Navy Day 2020.