Self-reliant without Dependencies is vital - Rajnath 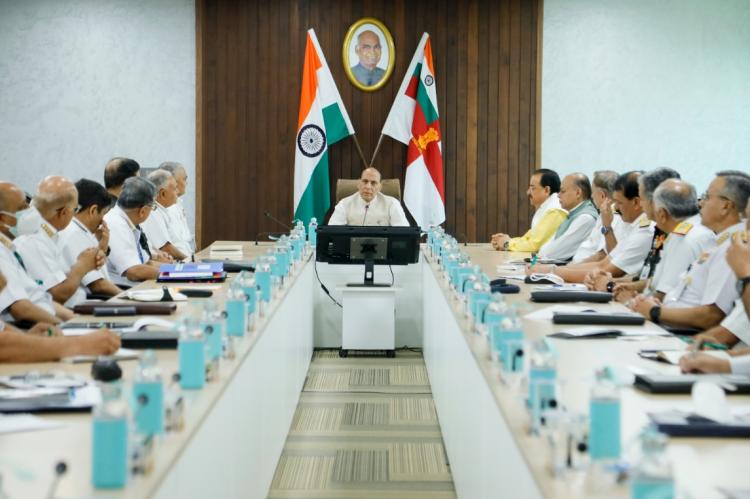 Minister of Defence Rajnath Singh addressed the Senior leadership of the Indian Navy on the concluding day of the Naval Commander’s Conference on 28 April 2022. Minister of State Ajay Bhatt, Defence Secretary and other senior MoD officials were also present.

Stating that he has interacted extensively with officers and sailors of Indian Navy in the last three years, Rajnath commended the sea warriors for their professionalism and dedication with which they continue to perform the duty of safeguarding the Maritime interests of the nation and for maintaining a high Operational tempo. He also congratulated the Navy for successful conduct of MILAN with participation of 39 Friendly Foreign Countries.

Defence Minister appreciated the Navy for having a visible, credible and responsive presence in the Indian Ocean Region and establishing itself as the ‘Preferred Security Partner’ and complemented the Navy for the successful rescue operations of Seychellois national at sea, the anti-Narcotics operations in Feb this year and deployment of the Navy’s Flood relief teams in Tamil Nadu and Andhra Pradesh.

Speaking on the prevailing security environment in the world, he referred to the ongoing Russia and Ukraine conflict and stated that this has once again highlighted that being self-reliant without dependencies is a vital necessity. He complimented the Indian Navy for being at the forefront of ‘AatmaNirbhar Bharat’ initiative of the Government and said that the Navy must continue to lead the way and remain a necessary guarantor of India’s Maritime Trade, Security and National Prosperity.

“It is heartening to note that in consonance with the ‘AatmaNirbhar Bharat’ initiative of the Government, the Navy has re-invested over 64% of its Capital budget into our own economy am told that the percentage share of modernisation budget is bound to grow upto 70 percent towards indigenous procurement, in this current financial year” – Defence Minister said.

Expressing happiness that out of 41 ships and submarines which are on order, 39 are being built in Indian shipyards, he said that it is important to leverage on the momentum that has been gained thus far and urged the senior leadership to maintain their focus on futuristic capability development, to ensure that the nation’s maritime power grows in tandem with the nation’s economic interests.

Speaking about the progress of first Indigenous Aircraft Carrier and the successful completion of the three sea trials, Rajnath stated that the delivery of, Vikrant, would be another milestone event and that all out efforts need to be made so that the ship is delivered and commissioned in the 75th year of our Independence, which would be a fitting tribute to the ‘AzadikaAmritMahotsav’.

Expressing confidence that the Conference and the deliberations over the last three days would have presented the opportunity to Commanders to introspect on the ongoing activities; take stock of progress made, debate fresh ideas and reflect on how best to achieve objectives in the future, defence minister wished Indian Navy success in all its endeavours.

The Conference presented an opportunity to the Naval Commanders to introspect on important Maritime matters at the Military Strategic level. They also shared views on key issues that confront our National Security with Senior Government Functionaries. The Chief of Army Staff and the Chief of Air Force Staff also interacted with the Naval Commanders and discussed avenues of augmenting Tri-Services synergy and readiness, in the prevailing Security environment.

The Naval Commanders, during the conference also interacted with ‘Think Tanks’ on Strategic issues, along the sidelines of the conference.