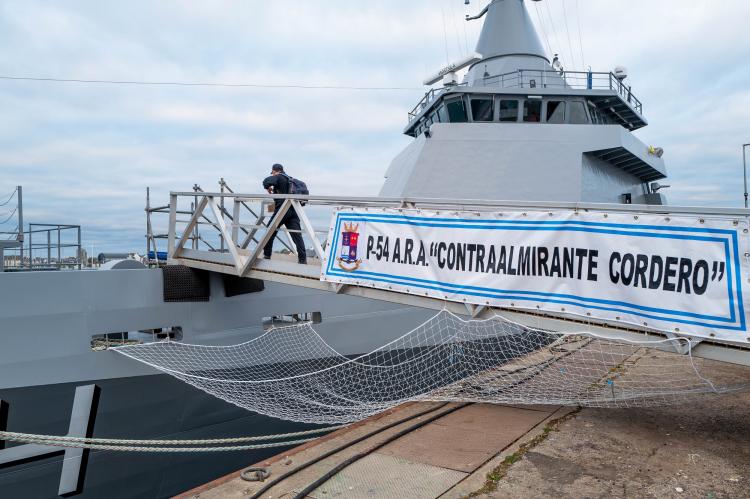 The last of the four Argentinian offshore patrol vessel (OPV), OPV 87 A.R.A.  Contraalmirante Cordero, was delivered today to the Argentine Navy. The  delivery and commandment handover ceremony of the last vessel of the  series marks the completion of a successful program.

A.R.A. Contraalmirante Cordero has been delivered to the Argentine Navy today in Concarneau in  the presence of Francisco Cafiero, Secretary for International Defence Affairs at the Argentine  Ministry of Defence, Vice Admiral Enrique Antonio Traina, Deputy Chief of Staff of the Argentine  Navy and Alain Guillou, EVP International Development at Naval Group. It is part of the contract  signed by Naval Group with Argentina in 2019 for the supply of four Offshore Patrol Vessels (OPV  - "Patrulleros Oceánicos Multipropósito" in Spanish).

The A.R.A. Contraalmirante Cordero is the last vessel of the series and its delivery marks the  success of a program that has met all its deadlines: the A.R.A. Bouchard (ex-L'Adroit) was  delivered in December 2019 two months ahead of schedule, and the second and third offshore  patrol vessels A.R.A Piedrabuena and A.R.A Storni were delivered in April and October 2021, in line  with the original schedule.

This success was made possible thanks to the close collaboration between Naval Group, Kership  and Piriou, who worked side by side with the Argentinean Navy. The excellent overall customer  satisfaction rate, measured at 97%, confirms the excellent conduct of this program.

Captain Santiago Villemur, representative of the Argentinian Navy in France said: “We are  conscious that delivering 4 ships in 3 years, training the crews and providing the associated  logistics services was a real challenge. Our thanks and gratitude go to all the men and women of  Naval Group and its industrial partners who have worked tirelessly to achieve this feat. These  ships are already contributing to the defence of Argentina's sovereign interests by enabling the  Argentine Armada to carry out its missions at sea.”

Stéphanie Giroud, director of the program at Naval Group added: “It is with great pride and  emotion that we are delivering the last vessel of the series to Argentina on the exact date  stipulated in the contract and are witnessing the raising of the Argentinean flag in Brittany for the  fourth time. The success of this project is a collective one and is due to the excellence of the  relationship established with the Argentinean Armada, whose high standards and confidence have  motivated our teams to meet the client's expectations to the maximum. It is also the result of a  constructive and innovative industrial partnership between the teams of Naval Group, Kership  and Piriou.”

The Argentine offshore patrol vessels benefit from innovations developed by Naval Group and  proven by the French Navy, which has operated L’Adroit in several oceans for six years for  multiple maritime security operations, alone or in cooperation. The three patrol vessels of the  series constructed in Concarneau offer the same assets and features as those of the A.R.A.  Bouchard. Several developments have been incorporated to meet the needs of the Argentine  Navy as closely as possible. Better armed and motorised than the Bouchard, equipped with an  active stabilisation system and a bow thruster, it is also Ice proven, i.e. adapted to navigation in  the cold waters of Antarctica. They offer:

 A 360° visibility from the bridge and a unique mast for a panoramic radar coverage;   The rapid, safe and discrete deployment of intervention crafts launched by a double  system of ramps at the stern of the patrol vessel.

This range of ships also benefits from Naval Group's expertise in information and command  systems, allowing for extensive surveillance of the maritime space and the detection of suspicious  behaviours. The A.R.A Contraalmirante Cordero is equipped with the POLARIS® system and NiDL®  tactical data link system, specifically developed by Naval Group for state action missions at sea  and sea-proven by the French Navy

The Offshore Patrol Vessel is able to stay on high seas during more than three weeks, to reach a  speed of 20 knots and to accommodate a helicopter. Implemented by a reduced crew of 40  members, it is also able to accommodate about twenty extra passengers.