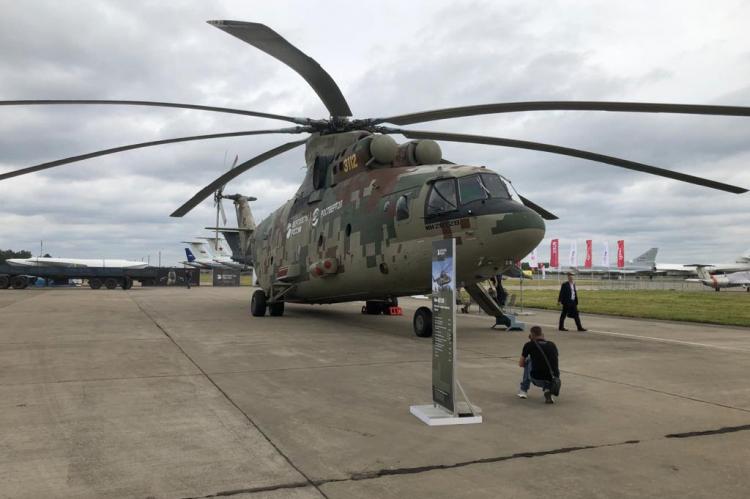 Russian Helicopters holding company (part of Rostec) and the Russian Ministry of Emergency Situations agreed on the delivery of the first heavy Mi-26T2 helicopter to the department's needs. The contract was signed during theInternational Military-Technical Forum ARMY-2020.

Mi-26T2 is an upgraded version of the Mi-26T heavy transport helicopter. It has received modern avionics, enabling operations at any time of the day, in adverse weather conditions and overterrain that lacks landmarks for orientation. The upgrade has also allowed reducing crew to 3 persons.

"Rostec supplies the Ministry of Emergency Situations with helicopters that are used for rescue operations, medical evacuation, firefighting and other missions. Mi-26T2 is the latest modification of the most powerful transport helicopter in the world. It significantly upgrades its capabilities in line with the latest requirements for avionics and flight safety," pointed outAndrey Boginsky, Director General of Russian Helicopters. "Mi-26T2 is already in mass productions and has been supplied to foreign customers, who have been extremely satisfied with it. I am confident that the enhanced capabilities of Mi-26T2 will also be in demand for the demanding missions carried out daily by the Russian Ministry of Emergency Situations."

Mi-26T2 is equipped with modern navigation system. The helicopter comes with "glass cockpit" (digital system for flight instrument displays), systems for inertial navigation, Glonass and Navstar positioning, enhanced ground proximity warning, and energy-absorbing seats for the crew. It is equipped with a digital autopilot, capable of both navigating as well as landing the helicopter.

Its enhanced avionics can significantly reduce the workload on pilots, simplify their work, and also reduce the flight preparation time. Compared to the basic version, many processes are automated. At the same time, almost all systems are redundant to increase reliability and safety.

The helicopter is capable of performing various missions, such as evacuating up to 82 people from a disaster area or transporting 60 wounded and 3 paramedics, when used in the medical configuration. Mi-26T2 can operate as a tanker, transporting 14,000 liters of fuel and 1,000 liters of lubricants, and of course, extinguish fires using a bucket device.

RH has signed a contract with the Russian Ministry of Defense for the development of a modern shipborne helicopter. A signing ceremony was held as part of the International Military-Technical Forum "ARMY-2020", which is taking place in the Patriotic Park of Recreation and Leisure “Patriot” in the Moscow Region.

"This marks a new stage in the creation of modern shipborne helicopter. Earlier, working together with the Russian Ministry of Defense, we established the terms of reference required for R&D side of this project. Today, we validated the project with the signing of relevant documents. The new shipborne helicopter design has now been completely established, and we are moving on schedule, in accordance with the goals set by the customer", said the Director General of Russian Helicopters Andrey Boginsky.

Development work will be carried out by specialists from the National Helicopter Center Мil&Kamov. In accordance with the approved schedules, first stage of development is planned to be completed within three years.

The project will lead to the creation of universal shipborne helicopter capable of performing search and rescue, troop transport and ASW missions.