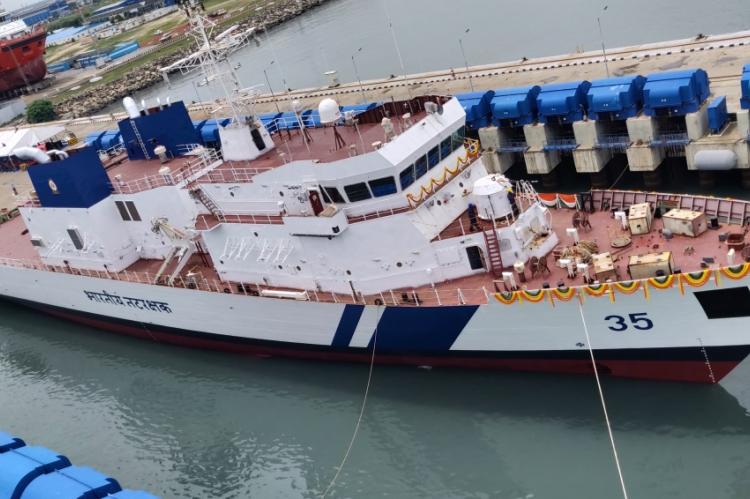 On August 30, L&T, India’s leading engineering conglomerate, delivered the second of the seven Offshore Patrol Vessels (OPV), ahead of the schedule, to the Indian Coast Guard, Company said in a statement.

The 2,160-ton vessel, designed and constructed by L&T, as part of a 2015 contract with Ministry of Defence. “The delivery of ICGS Vijaya comes close on the heels of the launch of OPV-3 on August 28 at the L&T Kattupalli shipyard. The work is simultaneously in progress on the OPVs 4, 5 & 6, that are at different stages of completion,” the statement said.

The first vessel of the series ICGS Vikram was handed over on April 11 this year, as a curtain raiser for DEFEXPO-2018.

Similarly,  Jayant D Patil, Whole-time Director (Defence) and Member of L&T Board, said: “Delivery of ships continuously ahead of schedule has won the confidence of our esteemed customers. L&T has pioneered in developing indigenous defence technology for the Indian Armed Forces for the past three decades. With a wide range of defence solutions on offer, L&T is diligently working to realize ‘Make in India’ in defence through a series of success stories across defence domains.”

“So far, 40 Interceptor Boats have been delivered out of the series of 54 Boats designed & built for the Coast Guard while the remaining 14 are also ready for delivery, with the program being about two years ahead of schedule. The Floating Dock FDN-2 for the Navy, designed and built for the first time in India, was delivered in March 2018 and is fully operational at Andaman & Nicobar Islands,” it added.

The company is also designing and constructing High-Speed Patrol Vessels for the Vietnam Border Guard.