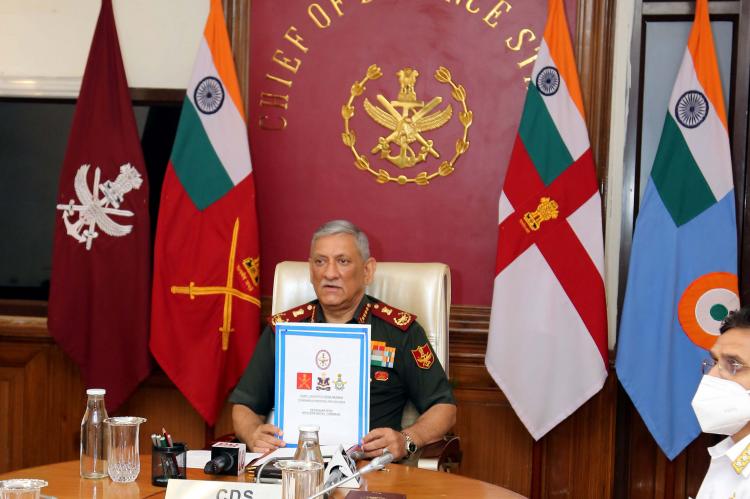 All future wars will be conducted by Tri-Service in an integrated manner. To enable our Armed Forces to conduct successful operations, it is essential that they be provided with sound logistics support during all stages of the war. Keeping these in mind, Chief of Defence Staff General Bipin Rawat operationalised and dedicated to the Services 3rd Joint Logistics Node (JLN) in Mumbai through video conferencing from New Delhi on April 01, 2021.

These JLNs will provide integrated logistics cover to the Armed Forces for their small arms ammunition, rations, fuel, general stores, civil hired transport, aviation clothing, spares and also engineering support in an effort to synergise their operational efforts. Speaking on the occasion, General Bipin Rawat said, “Establishment and operationalisation of JLNs is a very important first step in the direction of logistics integration of our three Services. Acceptance of each other's limitations and learning from each other's strengths and best practices is essential to help improve the functioning and efficacy of these nodes.”

This initiative would accrue advantages in terms of saving of manpower, economise utilisation of resources, besides financial savings. The CDS also complimented the 'Tri-Yodhas' on this occasion who put in their heart and soul to make this node operational and said, “I call upon everyone to continue to strive for excellence in our endeavour to become a fully integrated, modern and self-sufficient future-ready force.” Successful functioning of these three JLNs would prove to be important stepping stones for opening of more JLNs in different parts of the country.

The JLN would enhance joint inter-operability between the Services and go a long way in improving the logistics processes of the Armed Forces in accordance with Prime Minister Shri Narendra Modi’s directions to enhance the jointness among the three Services. This important milestone is a harbinger of further strengthening of integrated logistics in the Armed Forces and will enable them to operate in all areas and across all spectrum of warfare seamlessly.

The CDS also emphasised on the need to work towards greater logistics integration with national logistics, which has been provided renewed impetus in the recent past by saying it would help the Armed Forces to take benefit from the infrastructural and logistics improvements taking place at the national level. “Through this, we will bring to bear the actual 'Whole of the Nation' effort on our adversaries, he added. He also urged the Services to put-in concerted efforts to achieve cost cutting as well as modernisation.

The Joint Operations Division (JOD) under the aegis of Headquarters Integrated Defence Staff (Hq IDS) actively pursued and enabled establishment of the JLNs as the first concrete step towards logistics integration of the Tri-Service. Government Sanction Letter for establishment of JLNs in Mumbai, Guwahati and Port Blair was signed on October 12, 2020. The JLNs in Guwahati and Tri-Services, Andaman and Nicobar Command, Port Blair were operationalised on January 01, 2021.

Presence of senior officers from the three Services during the inauguration of JLN which was conducted virtually reflected the true essence of Tri-Service integration. The Standing Operating Procedure of the JLN was also e-released by General Bipin Rawat on the occasion.