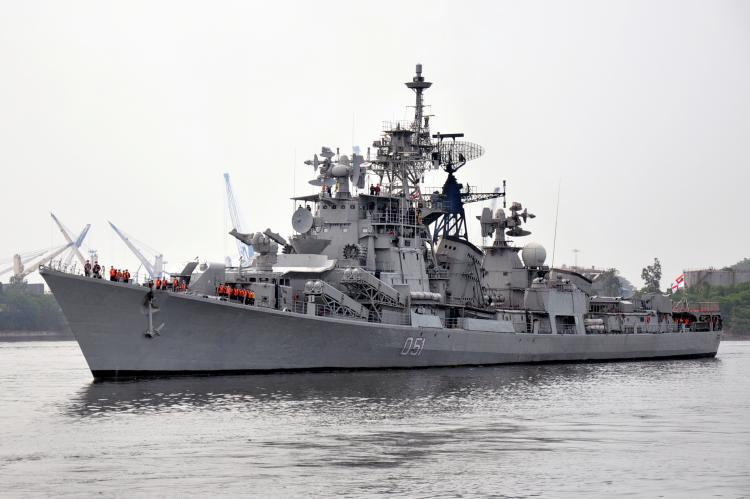 The Indian Navy’s first destroyer INS Rajput was decommissioned at Naval Dockyard, Visakhapatnam after serving the nation for 41 glorious years on Friday, 21 May 21. The ship was decommissioned in a solemn and low key event due to the ongoing COVID Pandemic when the National Flag, Naval Ensign, and the Decommissioning Pennant were lowered at sunset time in the presence of Vice Admiral Ajendra Bahadur Singh, AVSM, VSM Flag Officer Commanding-in-Chief Eastern Naval Command, the Chief Guest for the ceremony. In recognition of the yeoman service rendered to the nation by the ship, a Special Postal Cover was released by the Chief Guest on the occasion.

INS Rajput was commissioned on 04 May 1980, at Poti, Georgia (erstwhile USSR), as the lead ship of the Rajput Class Destroyers of the Indian Navy with Capt (later Vice Admiral) Gulab Mohanlal Hiranandani as the first Commanding Officer. During her service, the ship had the distinction of being part of both the Western and Eastern Fleets. She was based in Mumbai till Jun 1988 and thereafter was re-based at Visakhapatnam as part of the Eastern Fleet.

Endowed with menacing looks, the ship was equipped with an array of weapons and sensors which included, surface-to-surface missiles, surface-to-air missiles, anti-aircraft guns, torpedoes, and anti-submarine rocket launchers. INS Rajput was also the first ship to be fitted out to fire the supersonic cruise and long-range BrahMos missile. She was also the first Indian Naval ship to get affiliated with an Indian Army Regiment ‘the Rajput Regiment’.

In her glorious service to the nation, the ship has been helmed by 31 Commanding Officers. The ship since its commissioning has sailed a distance of over 7,87,194 nautical miles which is equivalent to navigating around the world 36.5 times and 3.8 times the distance from Earth to Moon.

The decommissioning ceremony was attended by very few officers and sailors from the Eastern Fleet and other organisations of ENC whilst adhering to the COVID protocols. The event was live-streamed on the internet and Naval intranet for the benefit of a larger audience viz., serving personnel, veterans, and outstation ex-crew who had served onboard the ship. The virtual attendees included Vice Adm Atul Kumar Jain, Chief of Integrated Defence Staff to the Chairman Chiefs of Staff Committee, former Commanding Officers and, Officers and Sailors of the Commissioning Crew.