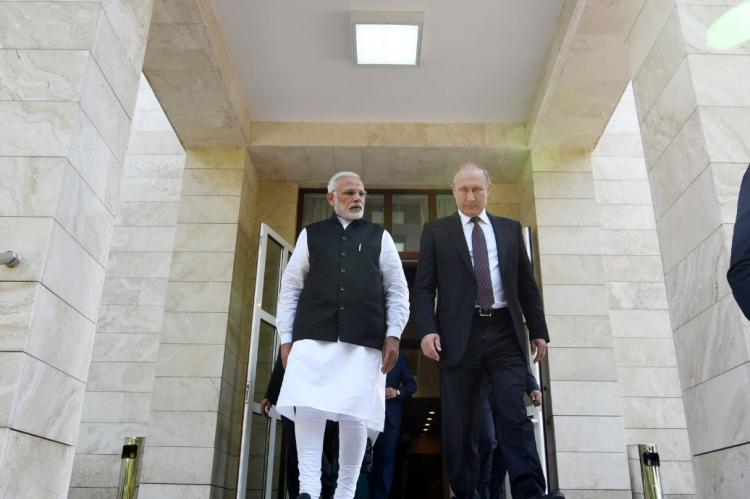 India-Russia defence ties, a critical pillar of Indo-Russian strategic partnership, have come under scrutiny and some stress in recent times. Despite some irritants, the Indo-Russian partnership is time tested and rests on very strong strategic foundations. It is a relationship that is based on mutual trust, and a long history of strategic interdependency that has been strengthened by people to people interactions in social, cultural, scientific, economic, and technological domains.

India – Russia strategic partnership revolves around very close cooperation between the two countries in areas of energy, Space, Nuclear, and defence. From an exclusive dependence on the former USSR for military hardware, India has diversified its sources significantly. Despite this, India continues to depend on Russia for nearly 60 per cent of its major military equipment, both through outright purchase as well as license production. In 1996, although the Indian economy was in initial stages of recovery, India signed a huge contract for the supply of Su-30 aircraft, which was critical for the survival of the Russian aircraft major, Sukhoi Design Bureau. 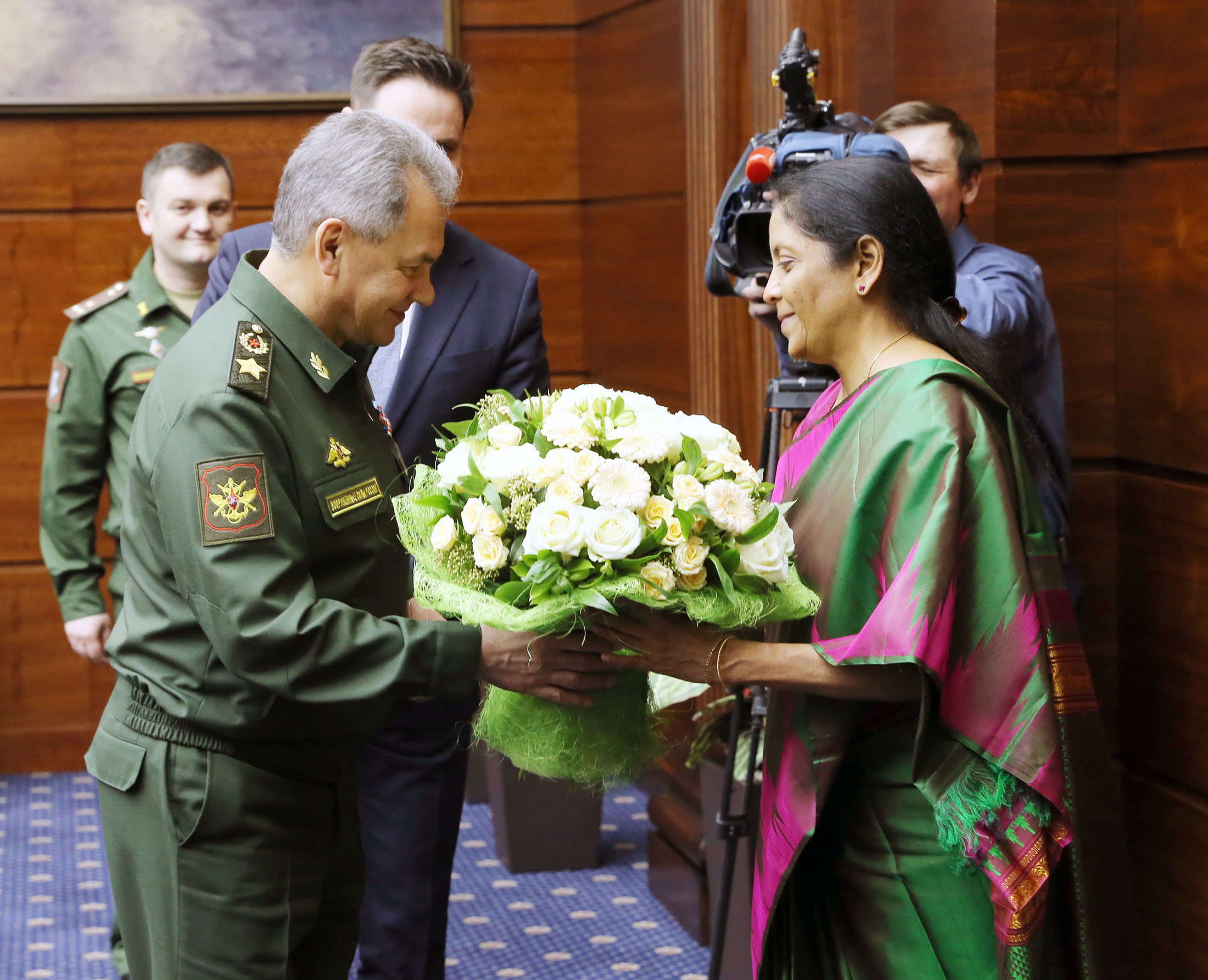 The importance accorded to this strategic partnership is highlighted by the number of summit level and informal meetings held between Prime Minister Narendra Modi and President Vladimir Putin in recent times. The October 2018 summit meeting between the two leaders was held with the threat of American ‘CAATSA’ sanctions in the background. The meeting produced a large number of agreements in the defence sector, with S-400 acquisition being the most significant. Although the two leaders’ statement was subdued, it still indicated a strong resolve to pursue mutual national interests and not succumb to American pressure.

As Russia grappled with changing global environment in the post-Cold War era, it focused its strategies on its economic recovery, based primarily on the export of its vast energy resources and military hardware. China emerged as its major customer, with a two-way trade nearing the US $ 100 billion. Russia - China military-industrial trade has been a critical factor in China’s recent demonstrated ability to achieve major breakthroughs in its defence technological capabilities. This close cooperation with China has certainly given rise to significant concerns, even as Russia has made overtures to Pakistan for selling some of its advanced weaponry in helicopters, Tanks, and aircraft.

While Indian and Russian leaders continue to make politically correct statements, the progress on the ground has been slow, with various ups and downs. Even though the recent formal signing of the USD 5.2 billion deal for S-400 air defence missile systems is a significant milestone, it gets tempered down when one looks at India’s announcement early in 2018 about walking out of the Fifth Generation Fighter Aircraft (FGFA) deal. One needs to analyse carefully to identify the reasons.

In recent track 1.5 discussion during December in Moscow, one could sense the disappointment in the Russian side about India’s recent huge procurements from the US (USD 13 billion) and France (USD 8.4 billion) at the cost of what usually would have been Russian business. Both sides clearly acknowledged the fact that India-Russia trade was way below its potential (barely USD 10 billion as compared to USD 80 billion between India and China) and that this was primarily due to the narrow focus on defence trade.

There is huge potential for expanding India-Russia trade in many other areas like energy, pharmaceuticals, manufactured goods, IT, Agriculture, education, tourism, and for the first time an innovative idea of immigration to solve much of Russia’s requirements in the Far-east. Both countries have committed to increasing their bilateral trade from the current low figure of less than USD 10 billion to USD 30 billion by 2025 and $ 50 billion by 2030. This focus would certainly re-energise the two countries to collaborate and tap each other’s strengths in different areas.

The major problem that afflicts Indo-Russian defence ties is the fact that both sides continue to engage in the Cold War format of the buyer-seller relationship. While interaction and partnerships in the areas of Space, Nuclear, and Energy fields have transformed significantly as one of the collaborative partners, the defence ties have remained stuck in the old format. This was evident when the Russian presenter indicated that Russia would be willing to sell advanced weaponry like the Su-57 to Pakistan, thus showing Russian frustration with India’s various procurement decisions in the last decade. The Indian side rightly ignored this needling as a sign of immaturity and put across its viewpoint that Russia needs to review its approach in looking at the potential of India-Russia defence industrial partnership.

Given the fact that India’s military is still dependent on Russian weaponry to a large extent, it is important to realise that there is a huge potential for both sides to benefit from the opportunities that arise from such a situation. This calls for the removal of some serious impediments.

The Russian side still views Indian defence procurement from a buyer-seller relationship. It has not appreciated the vast changes that have taken place in India’s policies with respect to the defence industry and manufacturing and investments. Russian policies inhibit Russian industries from dealing directly with Indian industries to develop joint ventures, including license production. This needs to be changed.

In almost all contracts, the procurement cost of Russian equipment has been attractive, but the life-cycle costs have been prohibitively expensive. This has resulted primarily from Indian DPSU’s failure to create the required ecosystem to manufacture components, aggregates and spares. Russian companies are also guilty of not having allowed these to be established in India and have used it to leverage higher costs for life-cycle processes. Frequent and illogical cost revisions by the Russians have made it worse, giving them an image of unreliability and of practising unfair coercion.

There is a huge potential for both sides to enhance defence cooperation, provided we grow out of communist-era legacies. Indian private sector has grown enormously and has significant potential in the areas of developing MSME ecosystem to address vast requirements of MRO (maintenance, repair, and overhaul).    Given India’s focus on “Make in India”, Russian companies could benefit immensely through joint ventures and address global markets jointly. Some of the major opportunities are listed below:

a.    Upgrade of Su-30 MKI aircraft fleet is long overdue. Joint ventures (JV) in this area could lead to cooperation in the design, development, and manufacture of avionics, sensors, and weapons.

b.    MRO of engines, aircraft, and helicopters.

c.    JVs in areas of materials, and tooling.

d.    Design and development of aero-engines.

The critical importance of India – Russia strategic partnership is well recognised. This is well addressed in areas of cooperation in Space, Nuclear, and Energy sectors. The defence dimension, however, continues to be stuck in the past, and this needs to be addressed urgently by both sides by opening out to allow their industries to create partnerships and collaborate to harness global markets jointly.

In areas of technology transfer, Russia has proved to be more reliable than most other countries. If there has been any problem in the past it was due to India’s inability to leverage and absorb technologies that were offered. The FGFA project is an example of poor handling by both sides, and India’s inability to leverage effectively. Strategic partnerships work on the principle of mutual interdependence and hence, each side should recognise their requirements correctly. Indian industry should recognise that Russian capabilities in defence technology offer significant opportunities if they seek ways and means of overcoming some of the barriers like communication and state apparatus.

India and Russia are critical members of the BRICS. Together, they would play significant roles in the evolving transformation of the International System of the 21st century. Establishing a mutually beneficial defence relationship is vital for this ‘Special Strategic Partnership’. This calls for increased interaction between the two sides to enable a very robust defence industrial partnership that involves not only manufacturing, but also joint research, design, and development using institutions and industries.

Air Marshal M Matheswaran AVSM VM PhD (Veteran) is a former Deputy Chief of Integrated Defence Staff. He is currently the Chairman & President of TPF – The Peninsula Foundation at Chennai.