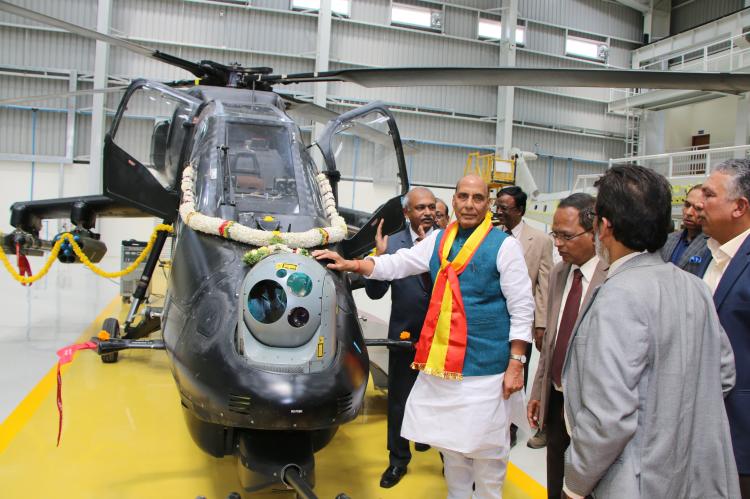 In another bold initiative to reduce import dependence, India, on Sunday, announced its first import imbargo list of hundred and one items for period starting from December 2020 to December 2025.

“MoD will introduce import embargo on 101 items beyond given timeline to boost indigenisation of defence production,” Defence Minister Rajnath Singh said while announcing on twitter.

“A separate budget head has been created with an outlay of nearly Rs 52,000 crore for domestic capital procurement in the current financial year,” he tweeted.

“The embargo on imports is planned to be progressively implemented between 2020 to 2024. Our aim is to apprise the Indian defence industry about the anticipated requirements of the Armed Forces so that they are better prepared to realise the goal of indigenisation,” he said.

The list is prepared after discussion with all stake holders and assessment of industrial capability across the defence ecosystem. The list will provide opportunity to Indian companies to come up with their systems and acquire required capabilities.

Almost 260 schemes of such items were contracted by the Tri-Services at an approximate cost of Rs 3.5 lakh crore between April 2015 and August 2020. With latest embargo on import of 101 items, it is estimated that contracts worth almost Rs four lakh crore will be placed upon the domestic industry within the next five to seven years.

Indicating a decision to purchase wheeled AFV, “The list also includes, wheeled Armoured Fighting Vehicles (AFVs) with indicative import embargo date of December 2021, of which the Army is expected to contract almost 200 at an approximate cost of over Rs 5,000 crore.”

"The Navy is likely to place demands for submarines with indicative import embargo date of December 2021, of which it expects to contract about six at an approximate cost of almost Rs 42,000 crore. For the Air Force, it is decided to enlist the light combat aircraft LCA MK 1A with an indicative embargo date of December 2020. Of these, 123 are anticipated at an approximate cost of over Rs 85,000 crore. Hence, there are highly complex platforms that are included in the list of 101 items, of which details of three examples are given," the ministry said in a statement.

The newly formed Department of military Affairs has been designated to identify more equipment for import imbargo.

“A due note of this will also be made in the DAP (Defence Acquisition Procedure) to ensure that no item in the negative list is processed for import in the future,” he said.

“All necessary steps would be taken to ensure that timelines for production of equipment as per the Negative Import List are met, which will include a co-ordinated mechanism for hand holding of the industry by the Defence Services,” he added.

"Hugely positive step by the MoD and Govt of India to affirm a Negative List if Imports. While many of the items of first list are already within the capability of Indian Industry, we would like to see long term aspirational list as well to give a target to Indian Industry to build capabilities over coming years and attain those targets," - Jayant Patil, Whole Time Director, L&T.

“The Kalyani Group welcomes announcement by the honorable Union Minister, Rajnath Singh. This strategic step will accelerate the Atmanirbhar Bharat narrative and bolster Indian defence equipment manufacturing industry. The growth of the domestic industry especially the MSME sector, will lead to self-reliance, reduced expenditure on imports, saving of foreign currency, creating job opportunities, revival of consumption and ultimately getting us closer to the common goal of 5 trillion economy. We are committed and will support the Indian Government achieve the goal.”- Baba Kalyani, CMD, Bharat Forge

"The Government of India's decision to significantly boost domestic procurement across a range of defence equipment will provide a much-needed fillip to Indian defence manufacturing companies. At Godrej Aerospace & Defence, we have helped develop and manufacture important equipment including critical airframe assemblies,  fuel tanks, valves, regulators and motor casings for a variety of missiles, missile launchers, actuators, PTO shaft and other parts for the LCA program, remote sensing antennas, thrusters and engines for ISRO’s Launch vehicles. As a long-term partner with deep partnerships with key strategic organizations like DRDO and ISRO for over 30 years, we look forward to developing a domestic eco-system to help boost India's domestic defence manufacturing capabilities in India and support the vision of self-reliance." - Jamshyd N Godrej, CMD, Godrej & Boyce

"This should have happened five years back. This is just a beginning. The list needs expansion. A list must be published which is in the gray zone where Indian manufacturers will get priority if produced." - LT Gen P Shankar (retd), former DG Art, Indian Army.

"The list is of those items mostly already indigenised. Anyways sends a feel good factor. The focus must be on indigenous production based on homegrown R&D. Government must bring out difference between reverse engineering foreign product and new product based on R&D." - Lt Gen Ashok Shivane (retd), former DGMF.