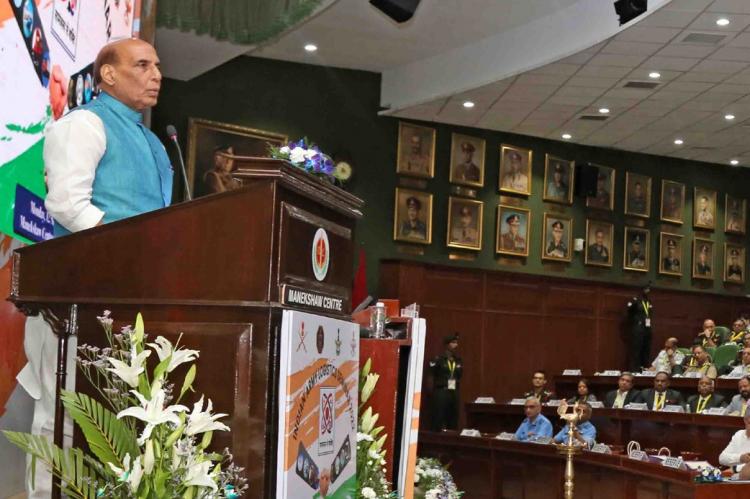 Government is committed to create a robust, secure, speedy and ‘Aatmanirbhar’ logistics system to effectively deal with future security challenges and take the country to greater heights. This was stated by defence minister Rajnath Singh during the keynote address at the first Indian Army Logistics seminar, organised on the theme ‘Samanjasya Se Shakti’, in New Delhi on September 12, 2022.

“India has become the fifth largest economy in the world today. It is fast moving towards becoming a $5 trillion economy. In future, whether in battlefield or civilian sector, the criticality of logistics sustenance is going to increase. In such a situation, reforming the system of logistics according to the needs of the 21st century is the need of the hour. Self-reliance is an important component in the field of logistics. To achieve our goals, we need an ‘Aatmanirbhar’ logistics supply system,” said Singh, while elaborating on the framework laid by the Government to make India a superpower in ‘Amrit Kaal’ by 2047.

The minister termed jointness among the three services as one of the major policy changes made in Ministry of Defence in the last few years, which has benefited a number of sectors across the board, especially logistics. He said, the foundation has been laid to establish a strong logistics system, which is pivotal for operational preparedness of the Armed Forces as it ensures that right items, with right quality & quantity, are available to the military at the right time and right place. Military logistics is an extremely important aspect that determines the outcome of a war, he said.

Elaborating on the visible positive results, Rajnath Singh stated that due to the Government’s efforts, the response time has been significantly reduced to deal with counter insurgencies as well as in disaster relief, humanitarian assistance, non-combat evacuation, combat search & rescue and casualty evacuation. This is an important aspect of Nation Building and all efforts are being made in this regard, he added.

Stressing on the need to continue bolstering the logistics system, he asserted that the government is focussing on establishing common logistics nodes in the country, as per the needs of the three services. Through these nodes, the resources of one Service will seamlessly be available to the rest, he said.

Rajnath Singh shared his insights on Information & Communication Technology (ICT) architecture, terming it as a major part of efficient logistics. “All the services have developed their ICT architecture. It is our endeavor that there should be interoperability between the three services, so that we can use our resources in the best way,” he added.

The minister called for civil-military fusion to further strengthen the logistics system and stay prepared to deal with future challenges. He emphasised that logistics in future wars will require jointness not only among the three Services, but also among different bodies in the form of industrial back-up, research & development, material support, industry and man-power. He called for formulating robust policies to enhance commitment & mutual trust between civil and the military, which will provide a renewed thrust to the Government’s vision of protecting the people from future threats. He suggested learning from the policies and best practices of different countries, stressing that the highest level of civil-military coordination can only be achieved when all stakeholders come together under a robust framework.

He also threw light on a number of policies formulated by the Government to integrate logistics in the country and make it self-reliant. These policies include National Logistics Policy, PM Gati Shakti and other efforts to ensure infrastructure development.

In his opening remarks, Chief of the Army Staff General Manoj Pande emphasised on bringing synergy in the efforts of the Nation to make India a global powerhouse of defence logistics. He exuded confidence that the ongoing efforts will not only cater to the domestic needs, but also help the friendly foreign countries. Chief of the Air Staff Air Chief Marshal VR Chaudhari, Chief of the Naval Staff Admiral R Hari Kumar and other officials of Ministries of Defence, Railways, Civil Aviation, Commerce & Industry, Paramilitary Forces and representatives of academia & industry were present on the occasion.

The seminar was conducted over three sessions. The viewpoints of eminent speakers and subject matter experts on the "Whole of Nation Approach to Logistics" were discussed. Experts from the Ministry of Defence and well-known consultants from business and academia discussed on the topic ‘Industry as a driver for Change in Military Logistics’. Young entrepreneurs and veterans & young officers of the Indian Army gave their perspectives on ‘Re-imagining Military Logistics via Technology’. The event provided 230 officers and more than six lakh viewers of the Indian Army YouTube Channel with an immersive learning experience and stimulating conversation. The chance to share opinions on this issue of national significance was appreciated by the participants.