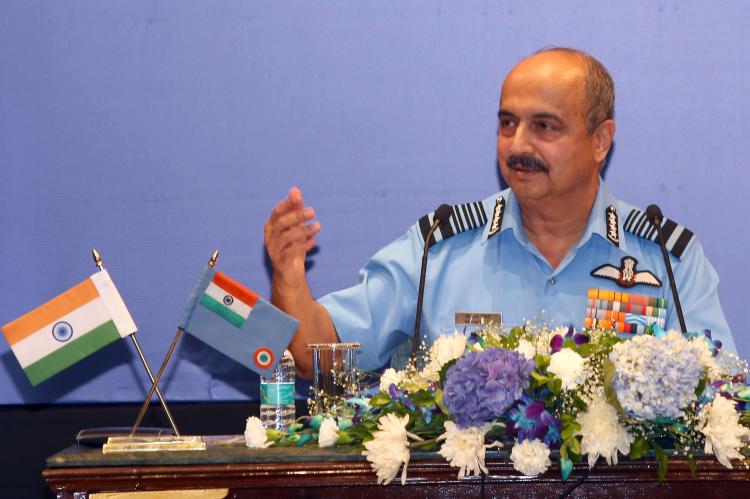 “We are not opposing any process of integration and any process of theatre commands. We have certain reservations in respect to the structures. We are fully supporting the integration process, it is only the methodology and the kind of structures that need to be future-ready, is that we are insisting on. Each service has a doctrine. The doctrinal aspects of the IAF should not be compromised in any way by the new structures,” the air chief said on October 5.

Speaking further ACM Chaudhari said, “We understand the imperativeness of joint planning and execution in future wars and are keen on integrating the efforts of the three services. We believe that the model of integration that we adopt must be future-ready, it must reduce levels of decision-making and capitalise on the strength of all three services. We need an organisational structure that is best suited for Indian conditions and our geopolitical imperatives.”

Explaining the doctrinal issues among the forces, the air chief said, “The next step would be to use our doctrines and well-trained manpower to evolve employment philosophies and concepts of operations. This would require joint planning and joint execution of plans.” 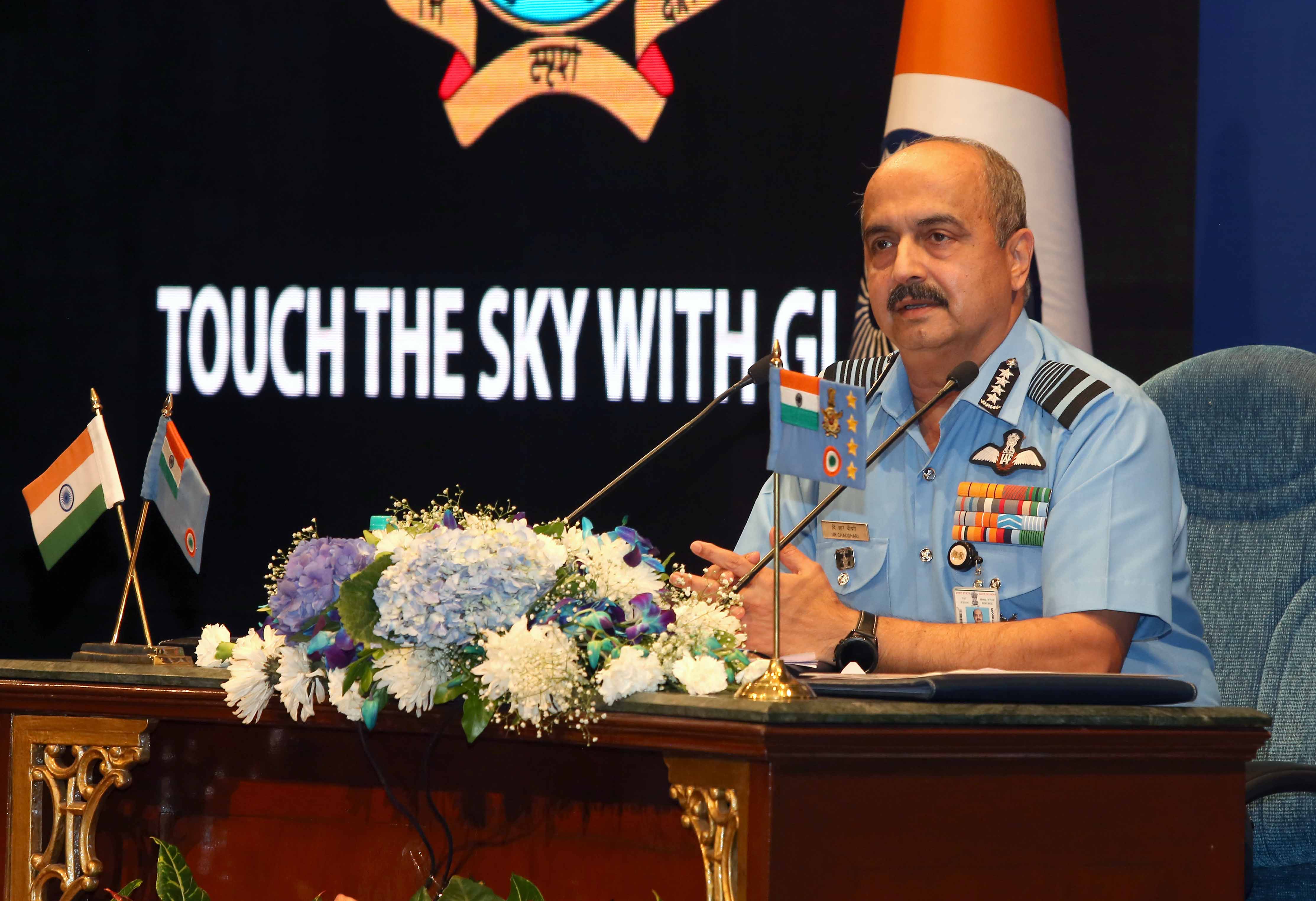 On the space warfare capabilities of IAF ACM Chaudhari opined that the IAF looks at “space as a natural extension of the air medium” and “Space-based assets significantly enhance the potency of air power.” The force has a strategy “to fully integrate our air and space capabilities to have a common picture of the aerospace medium and to enable optimum force application,” he added.

“Traditionally, wars were fought on the land, sea and in the air. Today, newer domains like cyber and space are increasingly affecting the conduct of operations even in the traditional realms,” he said. “To absorb these changes, the IAF is on the path of transformation so that we can fight and win tomorrow’s wars.”

In reply to a question on the recent disengagement along the LAC, he said, “We are keeping an eye on Chinese Air Force activities. We have increased the presence of radars and air defence networks. Appropriate non-escalatory measures have been taken in time”

Regarding the planned procurement of the six mid-air-refueller for which RFI has been issued, ACM Chaudhary informed that “It may take some time for the entire procurement process to fructify. Since we have enhanced the scope we have increased the scope to use aircraft modified for refuellers.”

IAF is shortly issuing RFP for wet leasing of the refueller.

On the IAF’s support to indigenisation, he informed that around 62,000 components are being procured from Indian industry and the ongoing conflict between Russia and Ukraine has not affected any shortage of spares or supplies.

“In the next few years, we are looking forward to inducting LCA Mk 1A, HTT-40 trainers, indigenous weapons, and different radars. The LCH has been inducted into the Air Force yesterday and I am confident that the helicopter will add teeth to the IAF’s strike capability. We are fully committed to the development of LCA Mk 2 and AMCA. The induction of C-295 aircraft is a step in the right direction and will boost the Indian aerospace manufacturing ecosystem,” he added.

Adding to it, Vice Chief Air Marshal Sandeep Singh discussed the need for acquiring the sanctioned strength of 42 squadrons of fighters as the security environment of India is and will remain hostile. According to him, the current strength of the fighter squadron has fallen to 30 and IAF at best can achieve 35 squadrons by 2035-36.

He also informed that IAF is upgrading “the Su-30 with indigenous weapons like the Astra air-to-air missile and the BrahMos missiles. The sensors are also indigenous and we have been doing it indigenously.”

IDI- In the ongoing Russia-Ukraine War, both sides are reluctant in using fighter jets as they are vulnerable to Air Defence. What lessons have been drawn by IAF given the fact that multiple fighter procurement programs are on?

ACM Chaudhari - In wars, whenever setbacks and losses are experienced, tactics and patterns of attack are changed. We saw that in Kargil, both on the ground and in the air. We are seeing that in Ukraine as well. The usage of tanks in built-up areas, the role of IFVs, the employment of ships in the littoral, as well as conventional modes of attack by fighters and helicopters, have all come in for a rethink. In all domains and across platforms, we have & will continue to see changes in modes of employment. But fighters are still being used, both in standoff attack mode, as well as close-range engagements. The requirement of survivability in the modern battlespace is already a part of the future-ready service requirements on which our ongoing fighter procurement is based. It is also important to understand that each conflict has its dynamics and the reasons for Russia and Ukraine not to use fighters may not be applicable in our context.

IDI - UAVs are taking centre stage in ongoing conflicts and they are taking over the SEAD role in warfare. This has raised new requirements in air defence assets and training. How does IAF plan to counter UAVs in full-fledged war?

ACM Chaudhari - There is no denying the fact that the employment of UAVs in recent conflicts has enhanced their sphere of influence in aerial warfare. They are being employed not only for SEAD but also for a variety of other tasks like ISR and precision strikes. Over the years, the size and capability of UAVs have seen tremendous development, and technologically they have become much more advanced.

There, however, is a need to analyse and understand the capability of UAVs, and their likely employment in contested airspace during a full-fledged conflict between two militarily-capable countries. Some examples of UAV employment in recent conflicts were more or less in uncontested airspace, where they proved to be extremely potent. However, whenever employed in contested airspace, they faced significant attrition. Given the current capability of our adversaries, the employment of UAVs, to engage targets deep inside our territory, is assessed to be limited/unlikely. With its current capability, the IAF will be able to engage the UAVs before they engage targets.

Notwithstanding this, the IAF has taken serious note of the threat and is taking steps to address it. The main challenge in countering UAVs is their detection. While the large-size UAVs (HALE & MALE class) do get detected with the current AD radar network, it would be difficult to detect the small-size and slow-speed UAVs. Towards addressing this, efforts are being undertaken to develop radars capable of detecting this class of UAVs, at a larger distance. Counter UAV systems, which are capable of engaging them before they deliver their weapon load, are being procured and positioned at IAF bases.

IDI - Do you see any relevance of LCA Mk1A in emerging and future warfare? Will they be a good investment?

ACM Chaudhari - Absolutely, the LCA Mk 1A will be contemporary in many respects and would prove to be a capable aircraft for the IAF. Countries are still developing the next generation of manned aircraft while exploring new concepts of manned-unmanned teaming. Future variants of the LCA will also be capable of such operations.

IDI - World over militaries are shifting the deep strike responsibility from the air force to rocket artillery. How do you see the relevance of IAF fighters in this area, given the amount of time and assets employed for the Balakot Strike?

ACM Chaudhari - The question is based on sentiment, rather than fact. While standoff weapons have indeed become increasingly important, this has not been in lieu of a reduction in other platforms in any air force. It is just an internal rebalancing from manpower centric to firepower-centric approaches. In fact, the world over, investment in long ranged air-launched strike weapons and even long ranged strike platforms (manned and unmanned) is significantly high. Russia, US and China have ongoing stealth bomber programs that will give them global reach. While long-range rockets can be used to address and degrade a target, the effects could be transient and maybe not scalable. Further, the targets that can be addressed from one deployment location are limited to a small area. There are clear advantages of revisits, costs, the flexibility of application at points far apart, and precise calibration of effects that air platforms enjoy over surface-based vectors which have not changed.