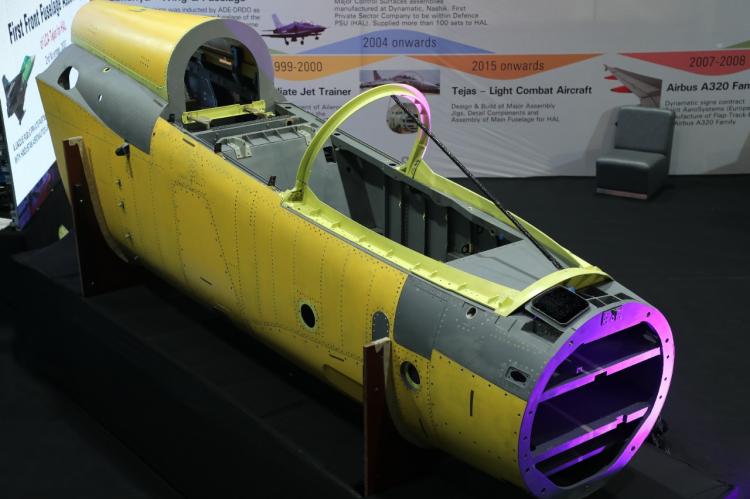 Dynamatic has built the first front fuselage for the FOC version of the Tejas Light Combat Aircraft (LCA). This is the first time a complex fuselage section for a supersonic fighter aircraft has been built by a private sector company. Dynamatic has been a preferred production partner for Hindustan Aeronautics Limited (HAL) for over three decades on all their major platforms.

The completion of the First Front Fuselage was witnessed by Mr. R. Madhavan, Chairman & Managing Director and other Senior Executives from HAL. The event was virtually addressed by Dr. Ajay Kumar, Defence Secretary, Government of India.

Dr Ajay Kumar, Defence Secretary, said, “I am really happy and honoured to join in this historic occasion, when the first front fuselage of LACA has been handed over to HAL. I would like to heartily congratulate Dynamatic and HAL LCA team who have made this joint partnership greatly successful. I think this is the model for PSU Private Industry partnership in defence aerospace sector and we hope that this example will hold good stead for several other partnerships by HAL and other PSUs as well.

The future generations of LCA will continuosly grow. And we continue to see this as an evolutionary journey which will take India to newer heights in the fighter jet aircraft segment.”

HAL Chairman and Managing Director, R Madhavan said, “Dynamatic has done it again by delivering the front fuselage of LCA Tejas. The LCA program has a requirement of 20 aircraft sets per year and will grow with MK2 and AMCA. Dynamatic is a known and reliable supplier for HAL, and we will also look for opportunities on trainer and UAV platforms.”

Dynamatic Technologies Limited CEO and Managing Director, Dr. Udayant Malhoutra said, “Dynamatic has been privileged to be a production partner with HAL and the Ministry of Defence for three decades. The inductralization of LCA has gone through many upgrades during the build process. This the FOC version with a mid-air refuelling probe, and is a tremendous success story both for indigenous defence production, and for public-private-partnership with HAL.”

Dynamatic Technologies Limited and Central Scientific Instruments Organisation (CSIR-CSIO) have signed a MoU for jointly designing, developing and manufacturing futuristic solutions for the Defence and Aerospace, Healthcare and Agriculture industry.

“Our partnership with CSIO is aligned to Government of India’s vision of #AtmaNirbharBharat. Symbiotic relationships between private sector and government research labs will go a long way in our endeavour to build a self-reliant India. Dynamatic under the leadership of Dr. Udayant  Malhoutra, CEO & MD, Dynamatic Technologies Limited, has been championing Indigenisation of defence production in partnership with PSU’s and DRDO since early 90’s. This partnership between CSIO and Dynamatic is aimed at making futuristic solutions for Defence and Security, Healthcare and Agri industry.” Arvind Mishra, ED & Global COO, Dynamatic Hydraulics®