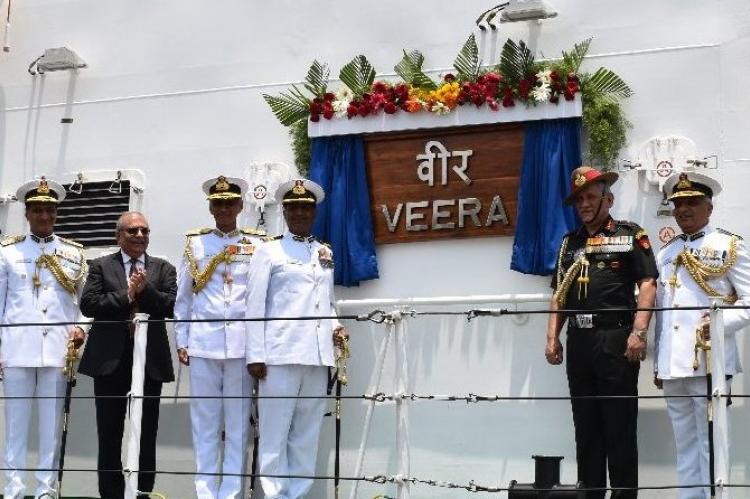 Chief of Army Staff General Bipin Rawat on Monday commissioned Offshore Patrol Vessel (OPV) Veera into the Indian Coast Guard fleet. It was handed over to Coast Guard on February 27. The ship is third OPV delivered to Coast Guard in last one year ahead of schedule.

The over 2000 ton ship is third in the series of seven OPVs contracted to Larsen and Toubro (L&T) being designed and constructed by L&T under a March 2015 Ministry of Defence contract for an order value of Rs. 1432 crore.

The order stipulated delivery of the first OPV within 36 months from signing of the contract, i.e., by March 2018 and subsequent vessels at intervals of 6 months. The first vessel of the series ICGS Vikram was handed over on April 11 last year, as a curtain raiser for DEFEXPO-2018. This was followed by Vijaya in last August. The work is simultaneously in progress on the OPVs 4, 5 and 6 which are at different stages of completion. The fourth OPV was launched in November last year and is presently being readied for sea trials.

The OPV is fitted with advanced technology, navigation and communication equipment, sensor and machinery. The vessel is fitted with a 30 mm gun and will be fitted with 12.7 mm gun with FCS. The ship is also equipped with an Integrated Bridge System (IBS), Integrated Platform Management System (IPMS), Automated Power Management System (APMS) and High Power External Fire Fighting (EFF) system. The ship is designed to carry one twin engine helicopter and four high speed boats including two inflatable boats for boarding operation, Search and Rescue, Law and order.

It has an endurance of 5000 NM at economical speed. The sustenance and reach, coupled with the latest and modern equipment and system, provides her the capability to perform the role of a command platform and undertake tasks to fulfill the Coast Guard charter. The crew of the vessel will be comprised of 12 officers and 94 men.

The ship will guard the eastern coastline.

The 98 meter long vessel is the 50th defence vessel built by the Indian defence major L&T at its Kattupalli Yard since receiving first MoD contract in March 2010. The breakup of the ship delivery is 46 interceptor boats, three OPVs and one floating dock. All these vessels were completely designed in-house at L&T’s Warship Design Centre using sophisticated design and digital analysis tools. The Floating Dock FDN-2 for the Indian Navy, designed and built for the first time in India, was delivered in March 2018 and is fully operational. The company has order for 23 more ships.

Kattupalli Yard is one of the largest and most modern shipyard designed and built inhouse to global benchmarks is capable of concurrent construction of multiple warships and submarines in covered workshops to attain unique efficiencies. Built in a sprawling 900 Acre campus, the Yard has been built as per workflow ideally suited for constructing warships, with inhouse design, modular engineering and build practices, high levels of pre-outfitting & innovative digital solutions as part of our Industry 4.0 technology initiatives and growth potential to be among the most efficient yards across the globe. Matching efficient platform construction at the Yard is our inhouse range of hull and engineering equipment, weapon systems, life support systems, sensors, power generation & distribution (PGD) systems and control systems offerings built assiduously through in-house R&D, design, engineering, manufacturing by active engagement with Indian Naval forces over three decades.