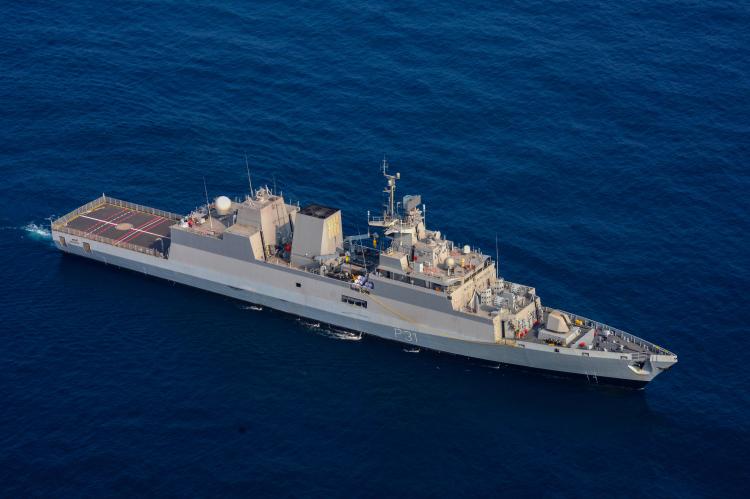 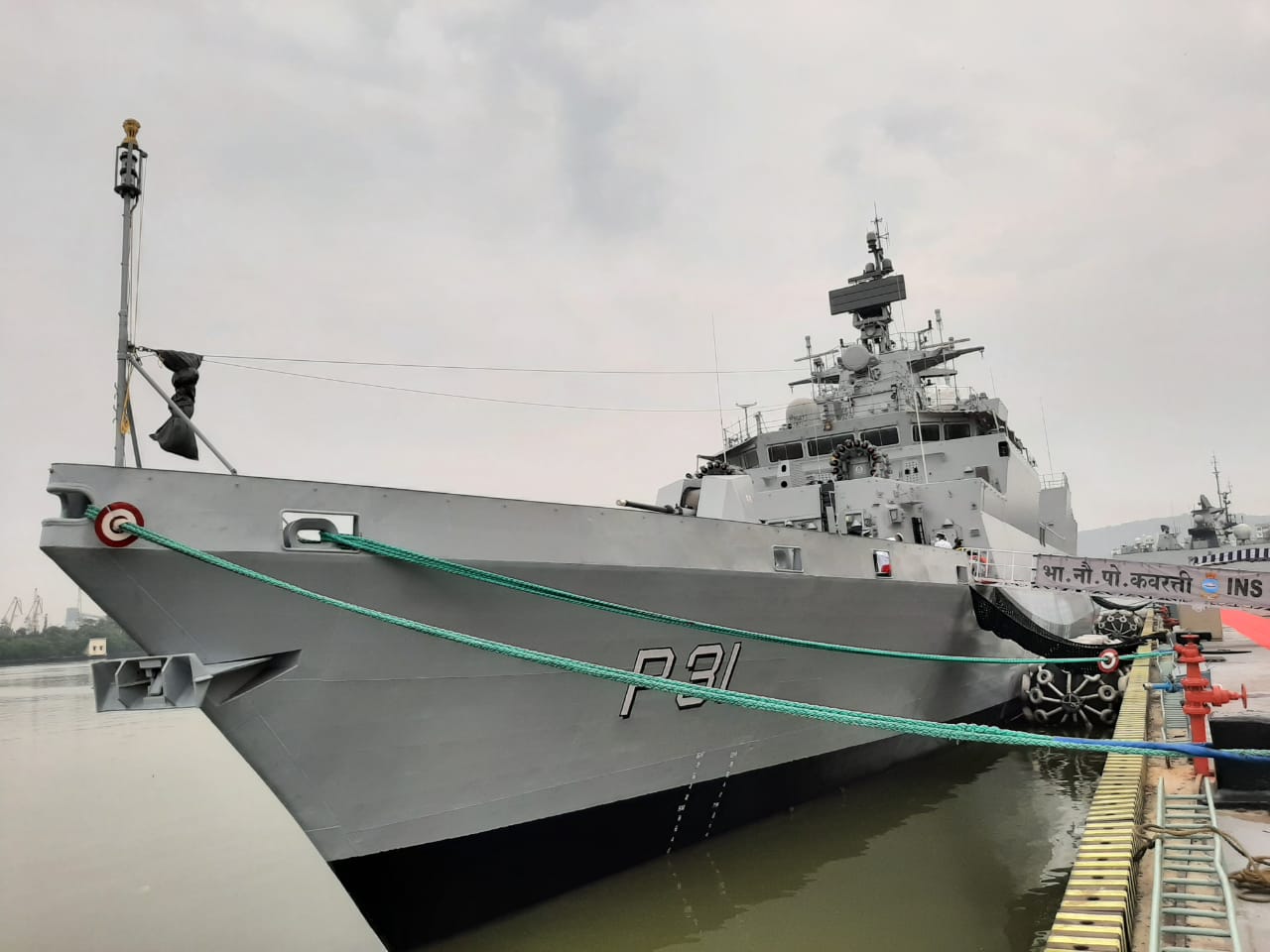 General Naravane was presented a guard of honour on arrival at the Naval Jetty. The inaugural address was delivered by Rear Adm Saxena (Retd), CMD, GRSE, Kolkata. Vice Adm Atul Kumar Jain FOC-in-C ENC addressed the gathering which was followed by reading out the Commissioning Warrant of the Ship by the Commanding Officer, Commander Sandeep Singh. Subsequently, hoisting of the Naval Ensign onboard for the first time and ‘Breaking of the Commissioning Pennant’ with the National Anthem being played marked the symbolic tradition of commissioning. The Army Chief later unveiled the Commissioning Plaque and dedicated the ship to the nation. He also addressed the gathering attending the commissioning ceremony.

Named after the capital of the Lakshadweep group of islands, INS Kavaratti has been constructed using high-grade DMR 249A steel produced in India. The sleek and magnificent ship spans 109 meters in length, 14 meters in breadth with a displacement of 3300 tonnes and can rightfully be regarded as one of the most potent Anti-Submarine Warships to have been constructed in India. The complete superstructure of the ship has been built using composite material. The ship is propelled by four Diesel engines. The ship has enhanced stealth features resulting in reduced Radar Cross Section (RCS) achieved by X form of superstructure along with optimally sloped surfaces. The ship’s advanced stealth features make her less susceptible to detection by the enemy.

The unique feature of this ship is the high level of indigenisation incorporated in the production, accentuating our National Objective of ‘Atmanirbhar Bharat’. The ship has high indigenous content with the state of the art equipment & systems to fight in Nuclear, Biological and Chemical (NBC) warfare conditions. Also, the weapons and sensors suite onboard is pre-dominantly indigenous and showcases the Nation’s evolving capability in this niche area. Some of the major equipment/ systems developed indigenously include Combat Management System, Torpedo Tube Launchers and Infra-Red Signature Suppression System etc.

INS Kavaratti has a multitude of advanced automation systems such as Total Atmospheric Control System (TACS), Integrated Platform Management System (IPMS), Integrated Bridge System (IBS), Battle Damage Control System (BDCS) and Personnel Locator System (PLS) to provide a contemporary and process-oriented System of Systems for optimal functioning of the warship. Having completed sea trials of all her equipment, Kavaratti has been commissioned as a fully combat-ready platform providing a boost to the ASW capability of the Indian Navy. 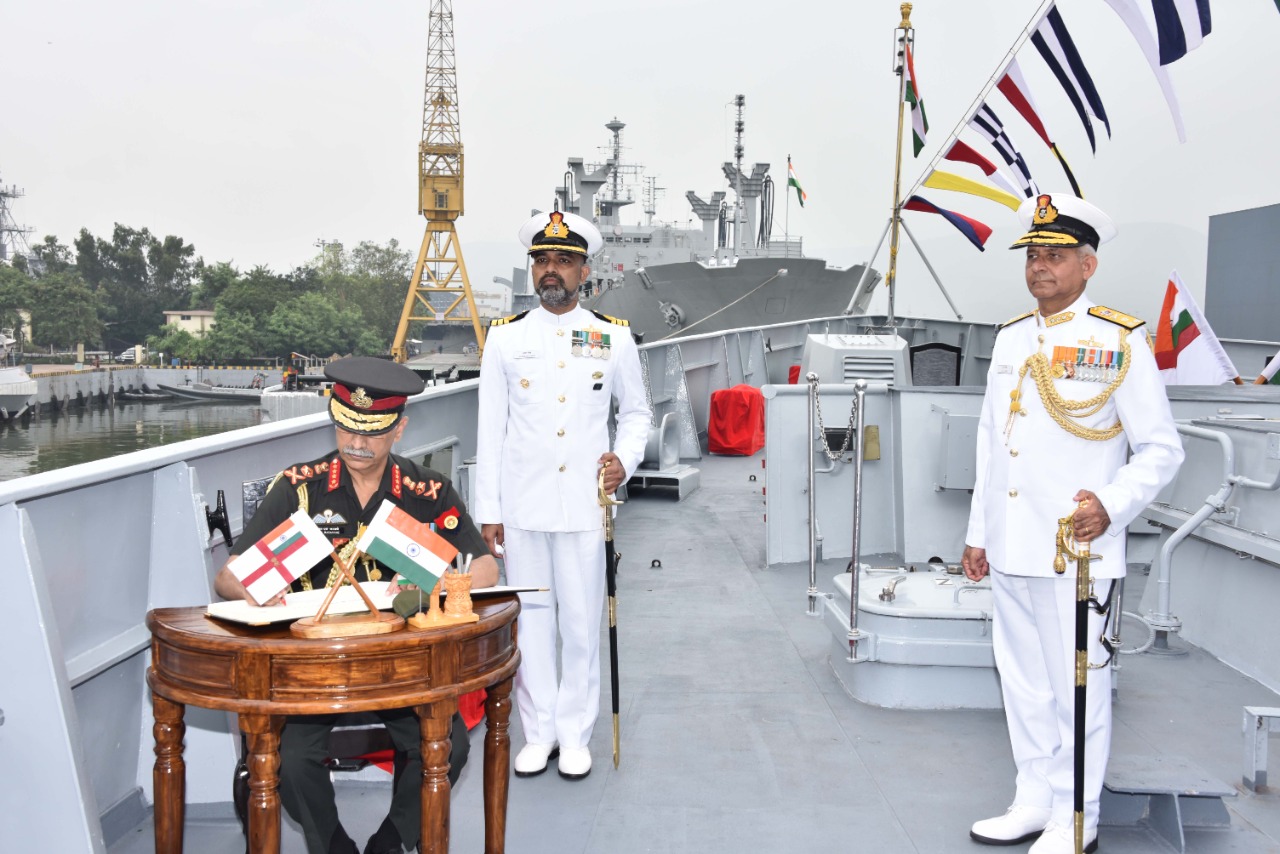 The ship is the reincarnation of the erstwhile Arnala Class missile corvette of the same name (INS Kavaratti – P 80). Kavaratti in her previous avatar has had a distinguished service and her legacy outlives her service life of almost two decades. Her illustrious past includes participation in the 1971 war for the liberation of Bangladesh and many other operational deployments. During the 1971 war, she was deployed for contraband control in the Bay of Bengal and the support of mining of entrances to Chittagong. She captured the Pakistani Merchant Ship Baqir during this operation. In the present avatar, Kavaratti is equally powerful and packs an even more deadly punch.

The ship is manned by a team comprising twelve officers and 134 sailors with Commander Sandeep Singh at the helm as her first Commanding Officer. The ship would be an integral part of the Eastern Fleet under the Eastern Naval Command.