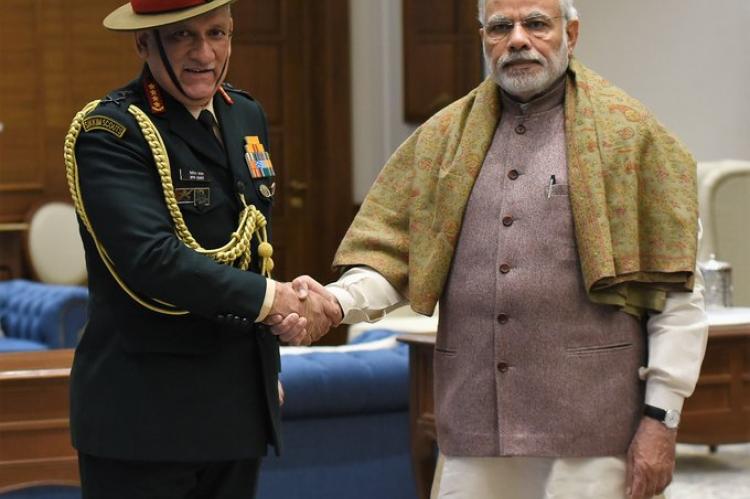 Chief of Defence Staff General Bipin Rawat, on Wednesday, along with his wife and eleven others died in Indian Air Force helicopter crash. He was on a visit to Defence Services Staff College, Wellington (Nilgiri Hills) to address the faculty and student officers of the Staff Course today.

“Around noon today, an IAF Mi 17 V5 helicopter with a crew of 4 members carrying the CDS and 9 other passengers met with a tragic accident near Coonoor, Tamil Nadu. An Inquiry has been ordered to ascertain the cause of the accident,” IAF said in a statement.

Gp Capt Varun Singh SC, Directing Staff at DSSC, who was flying with CDS,  with injuries is currently under treatment at Military Hospital, Wellington, IAF informed.

The helicopter took off from Sulur, Coimbatur to Defence Staff College, Wellington.

Condoling his demise Prime Minister Narendra Modi expressed deep anguish. “They served India with utmost diligence. My thoughts are with the bereaved families,” prime minister said in a tweet.

Calling him and outstanding soldier, Prime Minister said, “A true patriot, he greatly contributed to modernising our armed forces and security apparatus. His insights and perspectives on strategic matters were exceptional. His passing away has saddened me deeply. Om Shanti.”

“As India’s first CDS, Gen Rawat worked on diverse aspects relating to our armed forces including defence reforms. He brought with him a rich experience of serving in the Army. India will never forget his exceptional service," Modi added.

Minister of Defence Rajnath Singh called his untimely death an “irreparable loss to our Armed Forces and the country.”

Gen Rawat, after completing his tenure as Chief of Army Staff (2016-19), was appointed India’s first Chief of Defence Staff in 2019. He assumed the post of CDS on 1 January, 2020. As CDS he also headed the Department of Military Affairs, formed in 2020 as part defence reforms. He was spearheading the higher military reforms, most significantly, the theaterisation of Indian military commands.