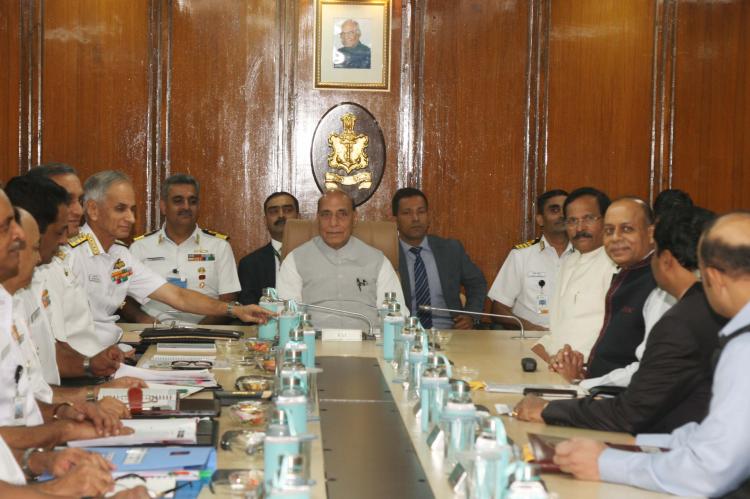 Shri Rajnath Singh stated that after visiting various naval ships, submarines and establishments, including IMAC (Information Management and Analysis Centre); and having witnessed a wide range of naval operations at Sea, he is confident that the Indian Navy will continue to perform the duty of safeguarding the maritime interests of the nation.

Raksha Mantri said, for Indian economy to reach the Five Trillion Dollar mark by 2025 there is a requirement for a stable and balanced environment in which Navy has a crucial role to play in the form of safeguarding the Sea Lines of Communication (SLOC) – the economic lifeline. He noted that it was heartening to see the swift and calibrated manner in which the Navy launched 'Operation Sankalp', in wake of the incidents involving attacks on oil tankers in the Gulf of Oman in May and June this year. Escorting Indian Flagged Merchant Vessels through this energy lifeline of the country during ‘Operation Sankalp’, the Navy has emphatically reiterated its ability to defend India’s critical national interests. 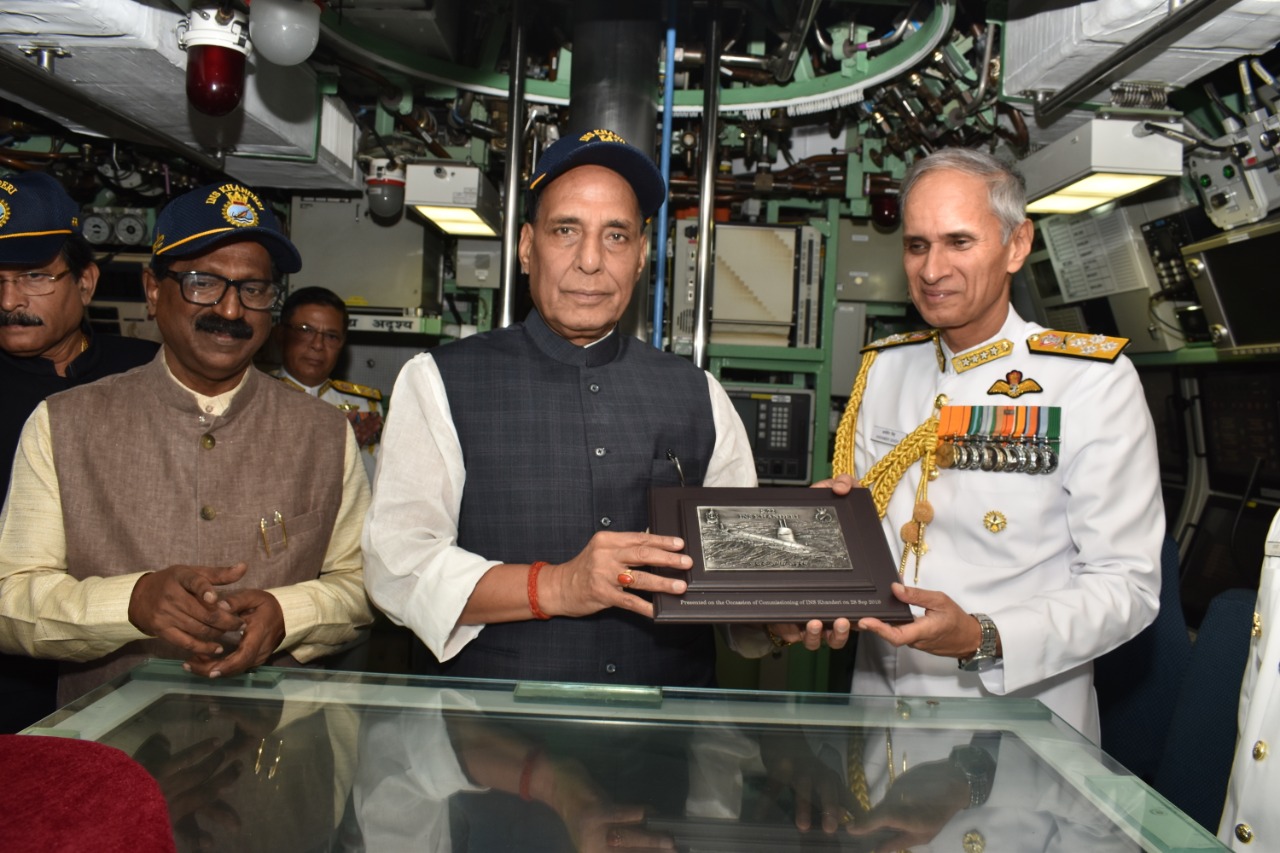 Speaking on Global terrorism, Raksha Mantri stated that it continues to be a challenge for all security forces and that sea routes have their own vulnerability. Post 26/11 Mumbai terror attacks, Navy has made concerted efforts to strengthen security and stability of our waters and coastal regions, and enhance inter-agency cooperation and coordination. He urged the Naval Commanders to continue reviewing procedures and strengthen the Coastal Security framework, so as to counter emerging threats and challenges, effectively.

Commending its role, Raksha Mantri said, the Navy’s Anti-Piracy Patrol duties in the Gulf of Aden since 2008, have been successful in safeguarding our maritime interests, and contributed immensely to maintaining maritime security of the region, which is in consonance with the Hon'ble Prime Minister’s Vision.

Shri Rajnath Singh also complimented the Navy for the efficient Humanitarian Assistance and Disaster Relief Operations undertaken in the recent past, both on Indian and foreign shores convincing him on the reach, mobility, sustenance and persistence of the Indian Navy, and its ability to undertake operations not only within the country, but in the entire Indian Ocean Region, in peace and during war.

Raksha Mantri said that the Indian Navy has also established itself as a vital tool for military diplomacy, furthering the national and foreign policy objectives through active cooperation and engagement with not just Indian Ocean Region nations, but maritime nations across the globe. Appreciating the Navy’s Foreign Cooperation initiatives and sustained efforts at capability enhancement and capacity building of Foreign Navies, he stated that these initiatives have not only strengthened maritime security and stability in the region, but have also resulted in transforming the Indian Navy into a Preferred Partner for engagement in the Indian Ocean Region.

Shri Rajnath Singh appreciated the role of Navy in the field of indigenisation in consonance with the ‘Make in India’ initiative of the Government. Dedicated thrust has also been accorded to marine infrastructure projects in line with the ongoing and future expansion plans of the Navy. This includes strategic infrastructure projects like the Aircraft Carrier Dry Dock at Mumbai which Raksha Mantri inaugurated last month. He urged the senior leadership to maintain their focus on futuristic capability development, to ensure that the nation’s maritime power grows in tandem with our economic interests.

Raksha Mantri added that he had commissioned INS Khanderi and witnessed the launch of Nilgiri last month. These platforms bear testimony to the self-reliance in warship building that the nation has achieved. He emphasised on the need to increase the indigenous content with respect to complex machinery, and cutting-edge weapons and sensors urging all stakeholders to put in all-out efforts on these fronts.

Speaking on the announcement by Prime Minister Shri Narendra Modi on the CDS (Chief of Defence Staff), the Raksha Mantri stated that this would also improve the overall coordination amongst the three services.

Raksha Mantri reiterated that a strong Navy remains a necessary guarantor of India’s security and prosperity, and therefore the need for a modern, potent and credible Navy cannot be over-emphasised. He stated that he was confident that the Naval Commanders would identify key focus areas and strategies to further enhance the capability and efficiency of the Navy and wished fruitful deliberations.

The deliberations during the Conference will focus on addressing the contemporary security paradigms whilst seeking ways to enhance the combat potential of the Navy and to make the operations more efficient. Accordingly, the theme of discussions will focus on the 'Functional Reorganisation of Indian Navy towards improving Operational Efficiency' and 'Optimal Manning' wherein contemporary issues pertaining to 'operations', maintenance', 'op-logistics', 'data management' and 'improvement of organisational practices' are listed for deliberations. The event also provides an opportunity for the Commanders to undertake detailed review of the performance of weapon/ sensors, readiness of IN platforms.

All future operations would be planned and executed jointly by the three Services and therefore the ways to optimise joint planning structures, Tri-Service Synergy and operational readiness will be deliberated during the interaction with NSA, Chiefs of Indian Army and IAF. Commanders will also review the ongoing naval projects with a focus to enhance indigenisation through 'Make in India'.

The half yearly conference also reviews the developments in the region with a view to assess the way ahead for implementation of initiatives towards the concept of SAGAR (Security and Growth for All in the Region) articulated by the Hon'ble PM.