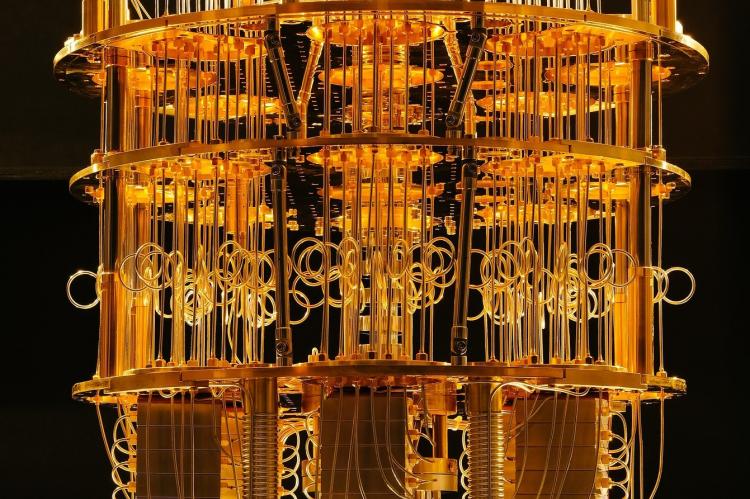 2019 IISS Military Balance published its theme article titled Quantum Computing and Defence[i] with an interesting statement, “The integration of quantum technologies currently represents one of the most anticipated advances for armed forces, yet their precise impact remains difficult to predict.” Its definitely in the news especially this decade (2011-2019) which has advanced physics [ii]with a comprehensive new understanding for humanity. Although these changes are not as profound as what happened in the first 30 years of last century [iii] that transformed physics and our understanding of reality through twin blows of Einstein's Theory of Relativity and Heisenberg, Dirac, Schrodinger's Quantum Mechanics. But these are profound enough to make many of us feel that we are "in the middle of a paradigm shift". A nation's security needs to be calibrated with the shift indicated in uncertain, unknown and even deliberately vague concepts that are finding the media to influence and impact key decision-makers on Quantum Computing. It requires comprehensive investment and resources of a special kind to understand, develop, experiment and operate in the quantum future of the world. How much the quantum future world will evolve to? How soon? And in what ways? Crystal ball gazers may come up with their versions of the year 2030 world as chaotic, more organized, more digital, zero-hunger, underground earth, Mars colonies, and whatnot. The challenge, however, lies to take bets on technological changes emerging rapidly and their impact on the way a nation's security is designed or developed. This is becoming a bigger challenge as the impact of the new technologies on the world is rapidly multi-dimensional, unlike in the past such changes. Well, one can argue that in the past also, with ICBMs delivering nukes or creation of cyberspace has impacted national security architecture in ways that could not be fathomed when these technologies were developed.

Irrespective, we suggest quantum computing promises to be transformative for the world at large in multiple dimensions and may create a new dimension of "quantum cyberspace" that may be akin to cyberspace that we created in last 30 years or so, but will be at scales that are at subatomic levels – mind-boggling indeed.Military Balance theme article identifies quantum computing as already given rise to Quantum Key Distribution (QKD), Quantum Cryptanalysis and Quantum Sensing that will impact strategic security significantly. The US Government report [iv]on Quantum Information Science (QIS) compares it withprevious examples of QIS-related technologies including semiconductor microelectronics, photonics, the global positioning system (GPS) and Magnetic Resonance Imaging (MRI). Further, the report recommends a science first approach to QIS and creating quantum smart workforce as two of its main policy directions.

If the promise and perils of quantum computing, QIS or quantum technology are anything to compare with the previous revolutionary technology of software, digital networks and new media we are in for a creation of a new global substrate that will be at the sub-atomic level. Let us call it the "quantum cyberspace", to indicate it expands the cyberspace to much deeper at the atomic and subatomic level and of course, it will differ as it will be based on quantum computing based on what we are calling quantum bits or qubits. Before we come to that, let us delve into quantum computing for the common reader to get a better understanding.

Shannon's information theory that has been the basis of the cybernetic revolution and has given birth to information technologydefines a measure of information in a message. It uses a way of representing information as a series or arrays of switches which can be in two states – on or off or 1 or 0. This definition led Shannon to revive a dormant field of mathematical logic called Boolean algebra that works on what is called a base 2 system of number representations. Contrast it to the base 10 or digital system in use with 10 representations corresponding to 10 counting numbers from 0 to 9. In the base 2 system or what is called binary system, we need just two representations corresponding to 0 and 1 and higher numbers can be represented as a positional organization of the base digitals – which in binary system are called Bits – a short for binary digits. The classical computing systems are all based on binary digits or representation of information/codification of higher-order information as the bits.

The quantum theory found the reality at the sub-atomic level is not a switch codifiable as a binary digit. The very act of finding or locating a particle changes it in a way that its location can not be ascertained precisely. Further, the particle is more of a probabilistic wave function, with a specific probability distribution that gives a very high probability of the particle to at its position but also a probability, although very small to be anywhere else in the universe as well. Further, a particle can be in states that are not only 0 or 1 as in a classical switch but can be in what is called superpositions of the two states. Superposition doesn't mean a simple OR of 0 or 1. It means a much peculiar way of playing the dice. It can be in 0 or 1 or in what is called a superposition of 0 and 1. The superposition associates with each bit now called Quantum bit of qubit two more numbers that are normalized to 1 (strictly sum of their squares is 1). These two numbers (let us say x% and y%) are the probabilities that the qubit is in 0 state or 1 state. The qubit can be represented as ([x%] 0 & [y%] 1). The qubits can be manipulated and operated upon just like classical bits can be with classical logical operators. The negation, for example, of this qubit will be ([y%] 0 & [x%] 1) – a quantum negation.

In the mid-1990s, Peter Shor, showed that computation using the above representations and operations can find out factors of a large number much faster than any other existing method to factor a large number. This resulted in the first design of a quantum algorithm. In 2001, the Shor algorithm was used to factor the number 15. By 2012, the algorithm was used to factor number 21. Just for the uninitiated, factors of number 21 are 3 and 7. Factors are divisors of a number that themselves are prime numbers. Some couple of years later an Indian-American computer scientist, Luv Grover, used quantum computing theory to devise a quantum algorithm for large database searches – it since called Grover algorithm. The value of such algorithms, when they become available at a large scale of qubits, is potentially to achieve multiple order of performance enhancements and capabilities that existing methods using classical computing can not achieve. This can lead to an ability to break the existing crypto security of communication and improve the searchability in dense and complex information networks.

Quantum computing uses key quantum mechanics ideas of superposition, measurement and entanglement. The classical computing has no such concepts. Entanglement is what Einstein called "spooky action at a distance". When two particles are entangled, one can know the state of another particle if one knows the state of the first particle, even when these particles are removed from each other to a large distance. This characteristic is of great use for secure communication as one can know if the message on its way from transmitter to the receiver has been tampered or eavesdropped.

Google claimed a 72 Qubit algorithm for random number generation. It is predicted that once we achieve a 300-qubit computing capability to process these possibilities we will have what is called “quantum supremacy”, a capability or set of tasks that cannot be performed by existing classical computing approaches.

Although quantum computing has seen slow and painful progress due to complexity of representation and building complexity of a radically different computer architecture based on particle spin, or polarization of light, yet it is seeing deep and considerable strategic investment by China, US, Russia and Europe. Its impact on the economy and national capability may be unclear as of now, however, one can be rest assured, we will be seeing the first and critical uses in national security as and when key players achieve specific technological or algorithmic capabilities in Quantum computing.

Towards a “Quantum Cyberspace”

Just like a previous paradigm shift that started the existing wave of innovation gave us a new substrate to play on – the cyberspace, we may be paving the way for what can be termed the "Quantum Cyberspace". With the 4th Industrial revolution already underway ushering in cyber-physical systems, we will be driving it by representing, activating and manipulating information at the sub-atomic scale using quantum mechanics. The resulting quantum-computing cyberspace will unleash a new wave of transformation that key technology and geopolitical powers would like to control and use it for their political objectives and interests. Just like the cyberspace with its first weapons already unleashed in the form of Stuxnet worms that made the Iranian nuclear reactor ineffective, the Quantum Cyber Space (QCS) will produce its own QCS weapons. These weapons potentially can harm the cyberspace, as well as more traditional dimensions of physical space infrastructure and platforms that we are used to. Imagine, a 2030 world where nanomaterials are quantum-active with quantum information encoding and manipulating their behaviour. The unmanned aircraft, the robots and the tanks of 2030 military force may be nanomaterials with the ability to hack the sub-atomic information using offensive quantum warfare systems.

What should India do today

Warfare and war in the next 25 years of what we call the Sixth Wave of Innovation [v]will be radically different as the technologies of the emerging paradigm will start influencing and transforming us in multiple dimensions.  Quantum Technologies based on quantum computing will be on the key transformational catalyst. We propose that India should

1. Take a mission mode approach like what we took in creating the BARC and ISRO. The new missions should focus on an amalgamation of technologies – for the Sixth wave of technologies that include algorithmic intelligence and quantum computing to synthesize biology, energy and reality.

2. We need to create a pool of next-generation quantum workforce that can not only understand the quantum technologies but use them to enhance national security and evolve the economic progress towards a more robust application of technologies.

3. India should actively participate in future technology groups and forums to build and collaborate networks of common interest actors who could join hands in minimizing the adverse impact these upcoming technological disruptions and maximize the value to national security.

Navneet Bhushan (Navneet) worked as a Defence Scientist from 1990-2000. He is the founder-director of CRAFITTI CONSULTING (www.crafitti.com) – an Innovation and Intellectual Property Consulting firm focused on co-crafting Innovation in global enterprises. He is the winner of Indira India Innovation award for Entrepreneurship and Innovation Leadership for 2012. He is the principal author of Strategic Decision Making- Applying the Analytic Hierarchy Process published by Springer-Verlag, UK, as part of the Decision Engineering Series. Navneet Blogs at http://innovationcrafting.blogspot.com.He can be contacted at navneet(dot)bhushan(at) crafitti(dot)com. He is currently working on his next book titled Crafting New Choices.