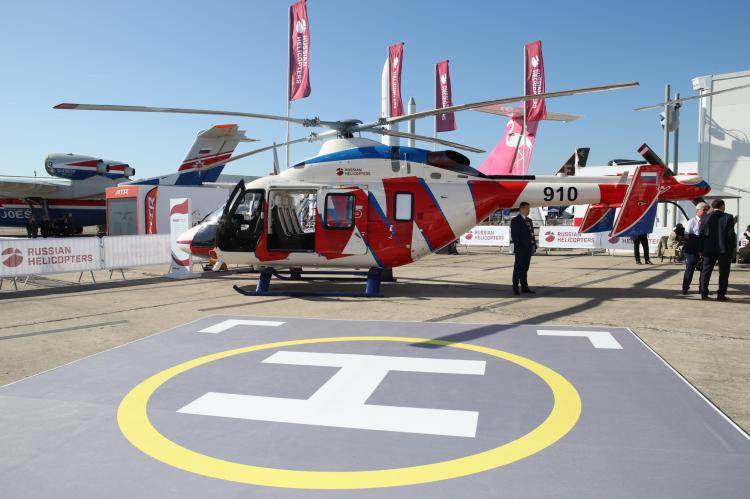 Russian Helicopters Holding Company (part of Rostec State Corporation) presented a concept of the modernized light Ansat helicopter at the International Paris Air Show 2019. The machine has new design solutions and options which will be introduced into serial production in the coming years. Two helicopters – one for medical and another for civil applications – are on static display near the Chalet area.

"Today, Ansat has already started entering the international market. But we understand that the further development and commercial success require compliance with the highest civil aviation standards. That's why, in Le Bourget, we present our solutions that will make Ansat even safer, more effective and technological. We will be ready to offer some of these solutions to our customers in 2020," said Alexey Garipov, chief designer of Kazan Helicopters Design Office.

It is planned that the Ansat fuselage will be partly made from composite materials which will help to reduce helicopter's weight and operation costs. The number of passengers will increase up to 8 persons, the range will expand by 30%. The light multi-purpose Ansat helicopter was designed by Kazan Helicopters Design Office. The machine is equipped with two engines and can be used for normal passenger and VIP transport, cargo delivery, environmental monitoring and as an air medical helicopter. High-altitude tests of Ansat have been successfully completed, which confirmed the possibility of its use in mountainous terrain at altitudes up to 3,500 meters.

The helicopter can be operated in a temperature range between -45 and +50 degrees of Celsius. Its significant advantage is the possibility of storage out of the hangar and low cost of operation.

It may be mentioned here that Russian Helicopters is exploring new markets and that earlier this year it had signed Memorandums of Understanding with five Indian companies to explore the production of a number of assemblies and components for Ka-226T helicopters in India. The Indian companies are Elcom, Valdel Advanced Technologies, Dynamatic Technologies, Integrated Helicopter Services and Bharat Forge. 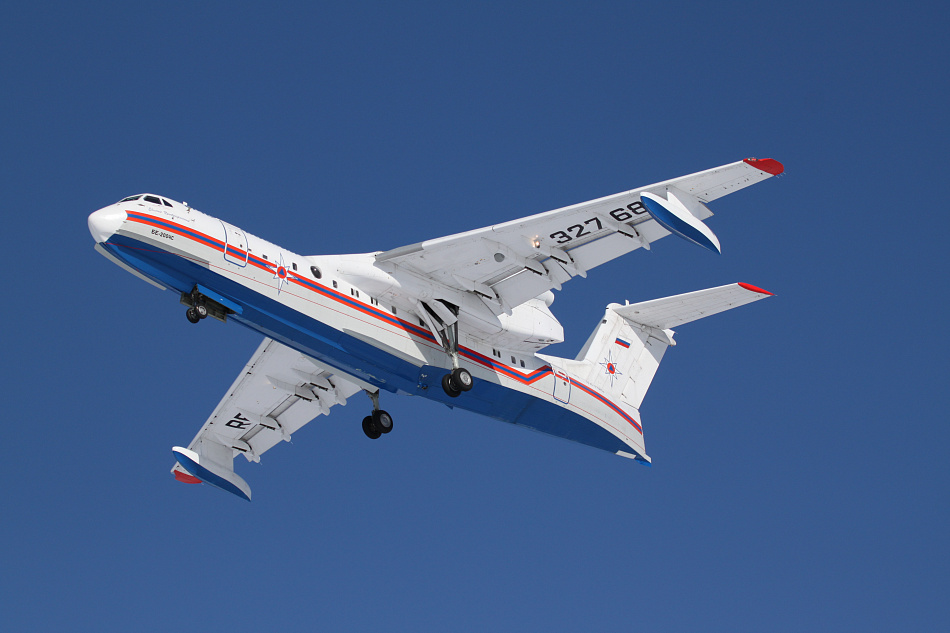 Russia’s United Aircraft Corporation (UAC) presented the Be-200ES amphibious aircraft which is mainly used for firefighting (it can take 12 tons of water on board), as well as for search and rescue, maritime patrol, cargo, and passenger transportation. The aircraft is part of the flight display here. The main operator of Be-200ES is Russia’s Emergency Ministry. The aircraft has been also exported to Azerbaijan.

“In recent years, we did not exhibit military equipment at Le Bourget and Farnborough for obvious reasons. Priority in the exhibition activities was shifted to the target markets of Southeast Asia and South America,” UAC’s representative said. “This year we are showcasing the Be-200, which is the best in terms of characteristics for the class of amphibians. Such a plane may be in demand in the Mediterranean region which is suffering from seasonal fires,” he said, adding that the Be-200 regularly helps with extinguishing fires in Europe.

Safran Helicopter Engines has received EASA (European Aviation Safety Agency) Type Certification for its Arrano 1A engine, installed in the Airbus Helicopters H160. Arrano is a new generation engine in the 1,100 to 1,300 shp power range, perfectly suited for new four-to-six tonne helicopters. The H160 made its first flight with the Arrano in January 2016.

Arrano Program Director Cyrille Ressejac-Duparc said, “We are proud to announce Arrano certification here at le Bourget. This engine lies at the vanguard of Safran Helicopter Engines’ new engine range and its performance is unrivalled. It features low operational and support costs, easy maintenance and a lower environmental footprint. After a test campaign of 10,000 hours, including 2,000 in flight, we are now ready to support H160 entry-into-service. Safran Helicopter Engines is also strongly committed to developing the HIL (Hélicoptères Interarmées Légers) military variant”.

“Arrano is a major asset of the H160 and one that is  fully aligned with the programme’s overall ambition of bringing innovations for greater customer satisfaction, thanks to its lower fuel consumption, its high level of performance, and its maintenance plan that has been harmonized with that of the helicopter’s, . Its certification passes a new milestone on the helicopter’s entry-into-service roadmap”, said Bernard Fujarski, Airbus Helicopters H160 Program Director.

The Arrano has been designed with simple maintenance in mind, and components and accessories are easy to access, disassemble and exchange. Servicing time is half that of previous generation engines. Operators also benefit from new digital services from Safran Helicopter Engines, including an electronic engine logbook (BOOST) and engine-life data tracking (Health Monitoring).

Embraer brought its first KC-390 multi-mission airlift configured to operate with the Brazilian Air Force (FAB) to the Paris International Airshow. The aircraft, number 004 is in the static area and it had flight demonstrations on the first two days of the show. Embraer's KC-390 is a tactical transport aircraft, designed to set new standards in its class while delivering the lowest life-cycle cost on the market. It can carry out various missions, such as transport and launching of loads and troops, in-flight refueling, search and rescue and firefighting.

“The assembly of the first aircraft to be delivered to the FAB marks a major change in Embraer's dynamics in this market,” said Jackson Schneider, President and CEO of Embraer Defense & Security. “The KC-390 is a multi-mission aircraft that has attracted great interest internationally and the Paris Air Show is the perfect occasion to showcase the aircraft in the configuration that will be operated by the FAB, proving its superior flexibility, performance and productivity.”

“The expectation for its entry into service is huge, considering the aircraft is a milestone in military aviation, where its innovativeness will bring improvements in the execution of multiple missions, contributing greatly to the fulfillment of FAB’s mission to control, defend and integrate our nation”, concluded Lieutenant-Brigadier Antonio Carlos Moretti Bermudez, Brazilian Air Force Commander.

The KC-390 program has already reached important milestones, such as Brazil's Civil Aviation Agency's (ANAC) Type Certificate and the production of the first series aircraft that performed its first flight in October 2018. To date, the flight test campaign has surpassed 2,200 flight hours.

At the Paris Airshow, Boeing Commercial has been having a rough time with its 737 Max still not cleared for the skies after the two recent air crashes. However, Boeing Defense is upbeat and hoping that it’s revitalized F/A-18 E/F Super Hornet aircraft will wow international prospects. It is not going to be an easy battle anywhere.

The Boeing Vice President Thom Breckenridge told media that the Super Hornet is presently up in six competitions across the world and the total requirement is around 350 aircraft. It has good prospects in Finland and Switzerland where the Hornets have been in operation. It is in Germany it will have to fight it out with Eurofighter Typhoon. Canada is also seeking fighters. 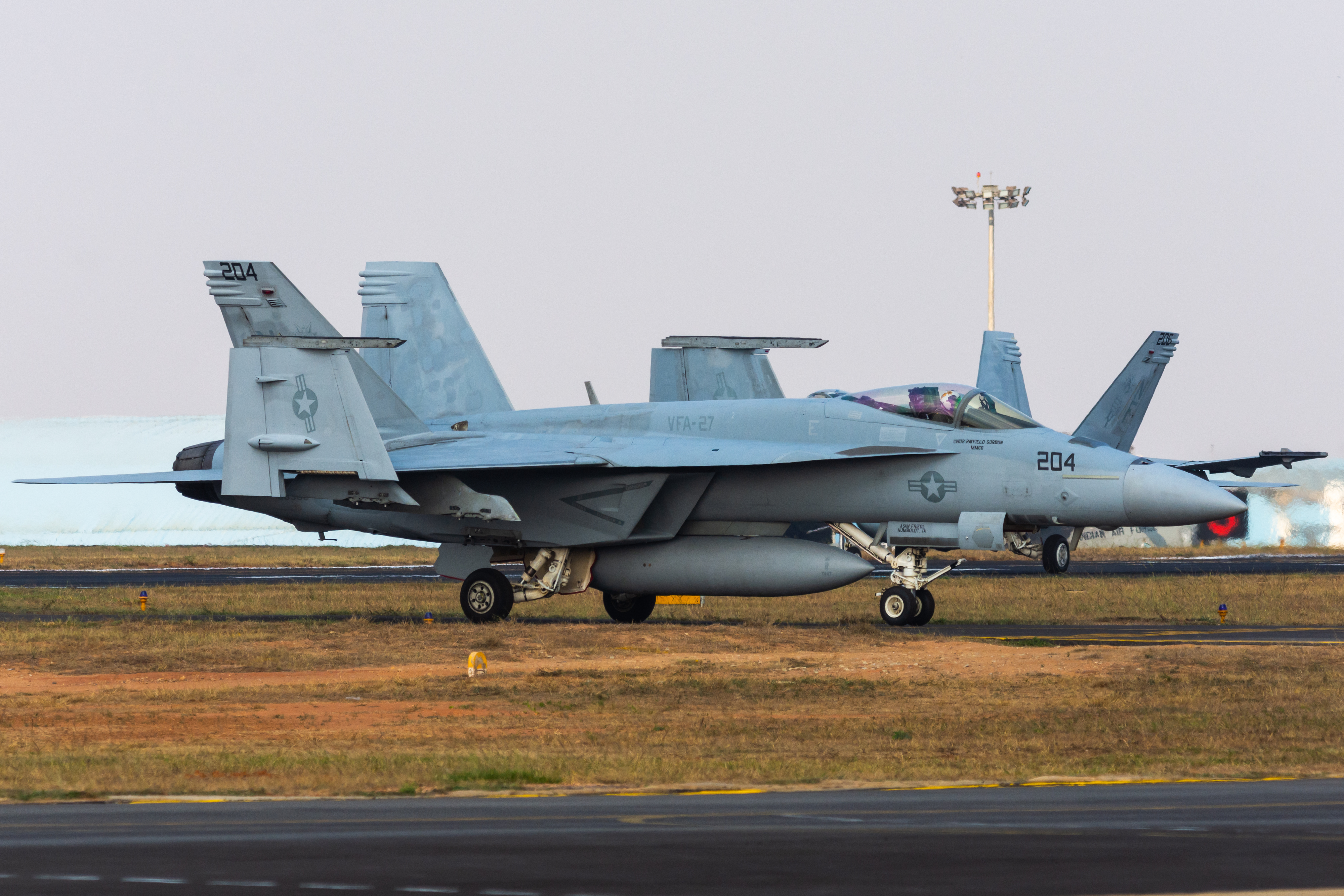 One key market Boeing is pitching is in India where the Indian Air Force and the Indian Navy have their own requirements. It is going to be a stiff competition here. The IAF order is for 110 jets worth around Rs. 800 billion. Boeing has already tied up with Mahindra Defence System and Hindustan Aeronautics Limited for producing F/A-18 Super Hornets. Boeing is offering to supply sensitive technologies, besides carrying out bulk of the manufacturing in India. So have the other players such as Lockheed Martin and Saab offered to join hands for manufacturing in India.

Boeing has been showcasing the capabilities of the aircraft and pointed out to the endorsement it got in March this year when the US Navy placed an order for 78 F/A 18 E/F Block III Super Hornets, costing about $4 billion. Breckenridge said the Block III had conformal fuel tanks for longer range, better connectivity with other assets, an infrared search and track (IRST), an advanced tactical data link and a new distributed targeting processor. 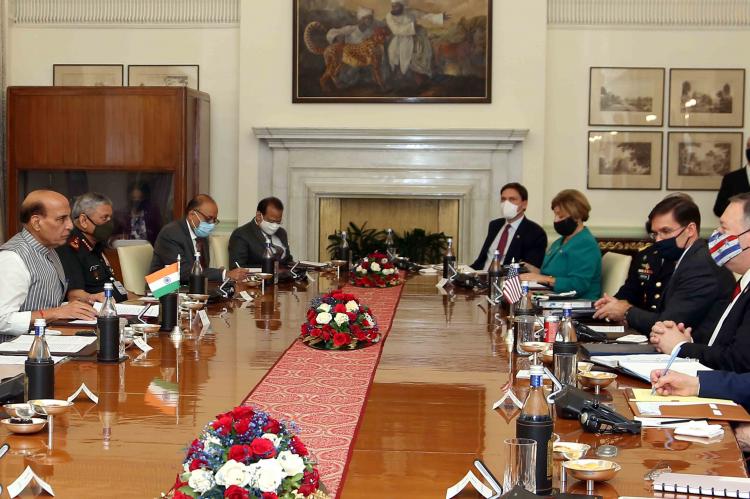