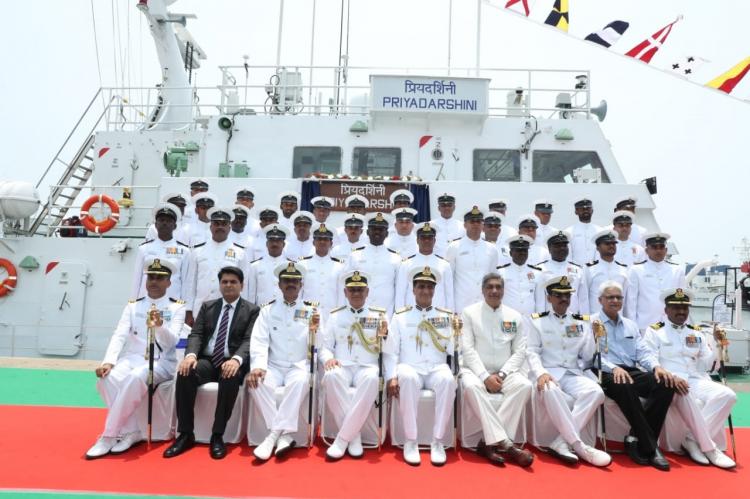 The ship ICGS Priyadarshini is the first in the series. The remaining four ships are in advanced stages of construction. The FPV is a medium range surface vessel capable of operations in the maritime zones of India. These powerful, fuel-efficient platforms are designed to perform multipurpose operations like patrolling, anti-smuggling, anti-poaching and rescue operations. The entire design of these FPVs has been developed in-house by GRSE as per requirements specified by Indian Coast Guard. The ship is 50 meters long, 7.5 meters wide with a displacement of around 308 tonnes. It is designed for a maximum speed of 34 knots with an endurance of more than 1500 nautical miles, and is equipped with 3 main engines with advanced control systems, water jet units and an integrated bridge system integrating all communication and navigation systems. The ships are also fitted with 40/60 gun as the main armament and will also have improved habitability features with fully air-conditioned modular accommodation for 35 personnel.

The FPV designs which are exclusive to GRSE are an improvisation on the Inshore Patrol Vessels (IPVs) built by the Shipyard for the Indian Coast Guard, a few years ago. Over the years, GRSE has established capabilities for in-house design and shipbuilding and have made significant contributions to the indigenous warship construction program in India. The Design R&D Unit of GRSE has been recognised by Dept. of Scientific & Industrial Research (DSIR), Ministry of Science & Technology, Govt. of India.

Having hit the 100 warship delivery mark in Mar 19, GRSE currently has a strong order book of around Rs. 22,000Crores equipping the shipyard with a deep pool of revenue-generating projects.14 ships which include03 P17A, 01 ASWC, 04 Nos. Survey Vessels (Large), 02 LCUs, 04 FPVs are in various stages of construction and are expected to be delivered to the Indian Navy and the Indian Coast Guard accordingly. Three ships of Project P17A Advanced Stealth Frigates are being constructed using Integrated Construction Technology, 3D Modelling concepts and latest software like Aveva Marine and NAPA.GRSE has also been declared successful bidder in competitive bidding for another 08 ASW- SWC ships for the Indian Navy, the Contract for which is expected to be signed shortly.

GRSE has entered its Diamond Jubilee year of operations and with today’s commissioning of ICGS Priyadarshini, GRSE has once again demonstrated its commitment to strengthening the maritime security of the nation, thereby living up to the aspirations that the country has reposed on this Mini- Ratna Category-I Shipyard. Over the last 60 years, the company has delivered 100 warships to the Indian Navy, Indian Coast Guard and the Mauritius Coast Guard.GRSE is the first Indian shipyard to hit this historic century landmark for warship building. GRSE has consolidated its position as the nation’s leading shipyard by building a range of warships from world-class Frigates to Anti-Submarine Warfare Corvettes to Fast Attack Crafts and many more.

GRSE continues to raise its bar higher in the sphere of maritime engineering excellence. The ace shipbuilder has set sail towards its growth trajectory in line with its vision to be a world leader with focus on four fold increase in Value of Production in coming 4-5 years, increased thrust on export of warships, incorporation of latest technologies (Artificial Intelligence, Machine Learning, Data Analytics) in various areas of operations to improve internal efficiencies and profit margins.Continuous research and innovation, excellent product quality, lean thinking and a strong corporate structure powered by an outstanding human capital promise a great future for GRSE