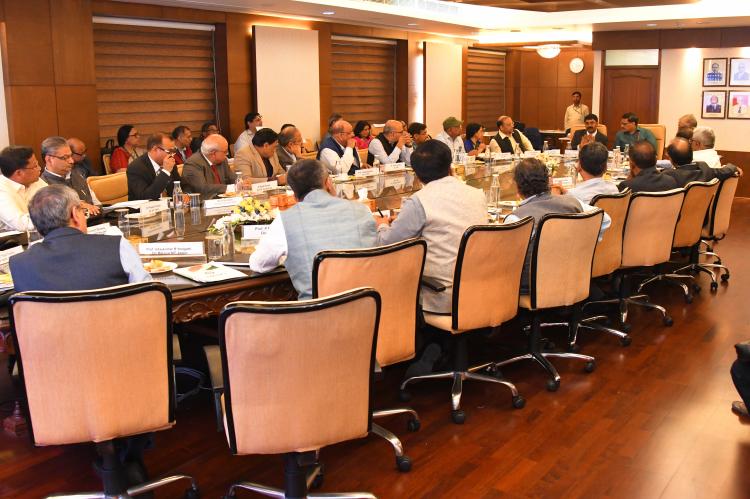 Defence Research and Development Organisation (DRDO) organised a workshop titled ‘DRDO-Academia Interaction for Achieving Leadership in Future Technologies’ here today. The workshop was aimed to leverage the academic expertise available in the country and increase the synergy with Academia. Various ideas were discussed to explore new horizons of collaboration so that research directly contributes towards defence products and applications. The avenues where the researchers and technology experts available in the country can be engaged strategically for contribution to the design and development of advanced defence products were also discussed.

Defence Research and Development has huge potential to absorb innovation which is not only limited to R&D organisations but can sprout from any corner of the country. DRDO has already established eight Centers of Technology in various universities in order to undertake targeted advanced research on the topics of special interest to DRDO for conceiving and realizing futuristic defence applications. Eminent academicians present in the workshop brought forward many ideas to forge the interactions between DRDO and academic institutions.

Raksha Mantri Shri Rajnath Singh has appreciated DRDO for its efforts towards strengthening the ties between Academia and Defence R&D. He said, Scientific and Technological Excellence is associated with National Pride and stressed that sustained efforts are required for utilising academic expertise for futuristic defence applications.

Speaking on the occasion, Secretary Department of Defence R&D and Chairman DRDO Dr G Satheesh Reddy called for directed research in specialised defence areas like Advanced Propulsion, Terahertz Technologies, Advanced Robotics, Cyber Technologies, Quantum Technologies, Smart Materials etc for future preparedness. He talked about various existing mechanisms for engagement between DRDO and Academia like CARS Projects, Extramural Research Projects, Technology Development Fund, Directed Research Project and Kalam Innovation Award etc. Dr Reddy said, DRDO is ready to bring out more models of engagement for enabling academia participation in mainstream Defence R&D. He proposed that models of engagement need to be worked out with accountability from both sides for increased technological output and its utilisation into defence products. The proposals and ideas are welcome from the Academia.

In his address, Secretary (Higher Education) at Ministry of Human Resource & Development (MHRD) Shri R Subramanyam stressed the need for an eco-system and effective synergy between all stakeholders for accelerated development of critical technologies. He proposed a joint task force to evolve a way ahead.